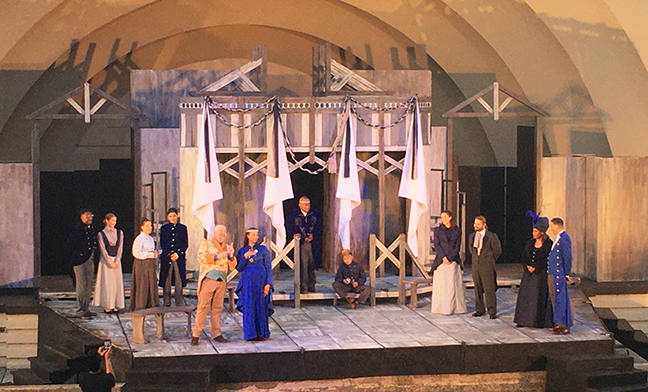 Free Shakespeare in the Park returns with “The Winter’s Tale” at the band shell in Reservoir Park.

In its 29th year of presenting Free Shakespeare in the Park, Gamut Theatre has partnered with Narcisse Theatre Co. to present the experimental, “The Winter’s Tale.”

This tragicomedy has little to do with cold weather and everything to do with changing seasons – a metaphor Director Clark Nicholson attributes to the sometimes unexpected and abrupt shifts we encounter in day-to-day life.

Presenting “The Winter’s Tale” outdoors amidst smells of sunscreen and insect repellant is intentional comedic irony from Gamut, in stark contrast with the play’s heavy beginning. The only cold things you’ll find then are the icy relationship between Sicilia’s King Leontes (FL Henley, Jr.) and his very pregnant wife Queen Hermione (Erika Eberly), and the cold-blooded murder and intrigue that ensues.

As soon as the heavenly intro music ends, plucking at your mood like sad violins, the conflict smacks you straight away. Leontes sees Hermione giving King of Bohemia Polixenes (Michael James Kacey) extra attention. At first, Leontes delivers veiled, passive-aggressive subtext to his wife. It escalates quickly into aggressive-aggressive. Blinded by rage, Leontes accuses Queen Hermione’s unborn child of being a bastard, physically attacks Hermione during her trial, and then orders the Queen and her accused lover Polixenes murdered. Their son, Prince Mamillius (Zahar Georgievskiy), is killed in the crossfire, and Leontes exiles the newborn to be consumed by the elements.

Leontes’ court advisors recognize he is abusing his power. Paulina (Jenni Chavis) brings a strong presence to the impassioned court physician and advisor to King Leontes. She chastises him for his vengeful behavior, especially his decision to reject the newborn princess. Camillo (Christopher Ellis), who was supposed to be the cupbearer carrying out the murder of King Polixenes, warns him instead.

The very tail end of Act 1 is when the comedy kicks in, and it carries through Act 2. Its comic relief helps us recover from that grim Act 1. Fast-forward 16 years, and the banished princess is all grown up. She has lived as a normal person among Bohemians in colorfully mismatched costumes, like a neon patchwork of humble folks who have a knack for fashioning something happy and useful out of very little.

The lighter mood shift is our reassurance that Princess Perdita (Sydney Crutcher) has led a good life, and we learn she’s found love with Florizel (Jimmy Kohlmann), Prince of Bohemia. Their marriage ceremony flows seamlessly with Bohemia’s sheep shearing party. Almost all loose ends are tied up at the end, with the plot mystically and beautifully foraying into the spiritual realm. (We inwardly hope that King Leontes, despite his treachery, is Perdita’s father. Otherwise, that family tree just became a wreath.)

Although Gamut Theatre remains committed to incorporating Shakespeare’s original verbiage, the actors do take some liberties in interpreting their characters, a choice that Gamut’s Executive Director Melissa Nicholson supports. It’s a reminder that The Bard’s dialogue isn’t only for the erudite.

For example, the Shepherd (Jeff Wasileski) and the Clown (Josh Miccio) could have been acting their scenes at a hillbilly camp somewhere in the deep South. And Autolycus (Joel Colvin) has an overpowering Bronx accent. The Shepherd breaks character to deliver funny, tension-easing, contemporary one-liners.

Part of the romance of sitting outside to absorb live theater is the Reservoir Park venue, complete with a fresh coat of paint on the band shell, the familiar cracks and crumbles a blight of the past. Whenever the lighting (Tristan Stasiulis) shifts within the band shell, the set, props and even the flooring change color. With no lighting, the stage looks chalky and distressed. But the right lighting gives it an iridescent quality, like a mysterious crystal pirate ship sailing off and landing in an enchanted forest. The lighting in the spiritual realm is particularly inspired.

Nearing the end of his life, the Bard likely wrote the end of “The Winter’s Tale” with a kinder quill than perhaps the corners of the love triangle deserved. The themes find timeless relevance and resonance within humanity of any era: love and revenge, redemption and reconciliation, mistakes you can’t undo, and leaders coming to terms with accountability. Those who abuse their power will eventually have to answer for their actions, even if their consequences aren’t immediate.

If you go, bring a lawn chair, umbrella, lawn blanket, sunscreen, insect repellant and your flexibility. Weather may foil the plot, but the interloping background noises become part of the three-hour experience.

Gamut Theatre’s Free Shakespeare in the Park, “The Winter’s Tale,” runs June 3 through 18, Wednesdays through Saturdays, in Reservoir Park, 100 Concert Dr., Harrisburg. Admission is free. To really get your Shakespeare on, Gamut will present “A Midsummer Night’s Dream” on June 22 through 24, and Narcisse Theatre will perform “Antigone” on Sept. 2 through 10 at Italian Lake, Harrisburg.