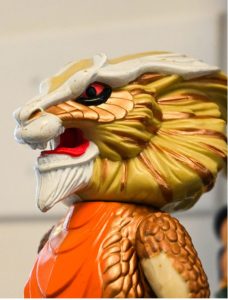 Walking inside one of New Cumberland’s newest shops actually feels like a step back in time.

“That’s what people say all the time,” said Kelly Donnelly, owner of Retro & Rad. “I describe it as happiness—a lot of good memories.”

Located at 308 Market St., the small shop is big on pop culture. Inside, you’ll find video games, action figures, vintage toys and collectibles—” a little bit of everything,” Donnelly said. “I’ve been collecting video games the last 10 years—that’s kind of where it got started.”

Her video game hobby led to a side business on eBay, then a booth at American Daydream Antiques & Miscellanea in York. Everything was doing so well online and at the booth that she left her full-time job working with children with behavioral issues—something she describes as “very rewarding but taxing.”

“I thought I’d open a shop if I could find the right brick and mortar [location], and I was lucky to find this retail space,” Donnelly said.

She opened Retro & Rad’s doors earlier this year, on April 1—no kidding. The shop, although neatly organized, is an explosion of pop culture and color.

Lava lamps and a Strawberry Shortcake dollhouse decorate the shop window. Action figures from the ‘80s and ‘90s are carefully catalogued, labeled and bagged, ready for action once again: Star Wars and Disney characters, superheroes including Batman and He-Man, Scooby Doo and the gang, Sesame Street friends, even the pretty pastel Care Bears.

Video games, like books on shelves, are organized for gaming systems from Atari to Xbox, Nintendo and Wii. There’s a shelf of Troll dolls, their neon hair fluffed out in all colors imaginable. Bright plastic lunch boxes are lined up for fans of Mickey Mouse, Cabbage Patch Kids, Captain Planet and Teenage Mutant Ninja Turtles. Need a pair of Power Ranger sunglasses? A toy Ghostbusters vehicle? Remember the dancing California raisins? Furby?

“The ‘80s and ‘90s were the best eras to be a kid in,” said Donnelly. “You had some of the coolest characters, movies, TV shows, video games—it was very brightly colored, well made, fun looking, with well-done artwork.”

Just to be clear, Donnelly, age 30, was born in 1991. But, wearing a brightly colored ‘80s jacket (green and purple; one sleeve a hot pink, the other a bright yellow, finished in blue cuffs), she identifies with those decades because she grew up playing with her extended family’s hand-me-down toys.

And Donnelly isn’t the only one riding a wave of nostalgia.

She said it’s a hot topic of conversation among collectors and experts right now—and there are a number of factors leading to nostalgia’s surge in popularity.

First, Donnelly noted, we’ve all been stuck inside a lot more than usual, driving demand for entertainment, movies and games.

“Nostalgia has always been key. When times are tough, everybody wants to be happy,” she said. “As in, I want to get that same feeling like when I was 6 playing Super Mario—everybody’s chasing that.”

While video game collectors search for specific games and systems, the hobby has attracted a lot of new followers because it’s affordable and accessible, Donnelly said.

Retro & Rad carries items with price points for everyone, from $1 slap bracelets and 10-cent trading cards to video cartridges for $2 to $3 or the extremely rare $160 Nintendo find.

It’s All About Recycling, No Duh

As inventory comes in (Donnelly buys or trades for cash), she posts pictures on Retro & Rad’s Facebook and Instagram pages. She also keeps a running list of customers by the cash register so she can notify them when she spots their wish list items.

“It makes me feel better when people bring me stuff, instead of it going to a landfill,” Donnelly said. “People talk about toys they used to have, that probably got thrown out. Even if video game consoles or controllers get broken, I have someone who can fix them.”

Retro & Rad is into community interaction, too. Once a month, Donnelly fills a bin with free toys for customers, there’s chalk for kids of all ages to decorate the sidewalk, and she regularly collects donations for local nonprofits.

One of the most exciting things to happen since Retro & Rad opened its doors is a partnership with The Nacelle Company.

“It’s a cool little partnership—we are one of 40 shops across the country that will be carrying their products,” Donnelly said. “Honestly, I have no idea how they found me.”

The Nacelle Company is purchasing intellectual property rights to old toys in order to remake them, spurred by the success of their popular Netflix documentary series “The Toys That Made Us,” which is in its third season.

“It’s awesome to say I sell toys for a living,” said Donnelly. “And making people happy is the best part.”

Retro & Rad is located at 308 Market St., New Cumberland, with an online presence on both Facebook and Instagram.