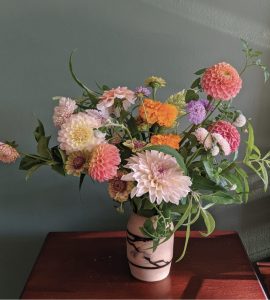 It brings a bit of life to a less traversed block of town.

“I think it has actually served us well to be tucked away and found by exactly our target customers,” said Muller of her location on Carlisle Street. “I like to say, ‘local flowers for local people.’”

Muller’s shop, Locaflora, is the only floral shop in the area that sources its flowers 100% locally.

“From within approximately 100 miles of Gettysburg,” said Muller, whose mission to create a sustainable flower shop began with her appreciation for farmers. “I believe that the most impactful thing about flowers is the people who grow them.”

In high school, Muller worked at a small, pick-your-own berry farm in nearby Biglerville that was just starting to grow its own flowers.

“I was really impressed by the way that flowers connected people to their grower,” she said. “It was just apparent to me that [customers] were coming because of [the farmers] as people.”

She also realized the tremendous difference between locally cultivated flowers and the flowers sold in grocery stores, 80% of which are imported and go through an extensive, chemicalized sterilization process to keep them on the shelves longer.

“Working for that farm gave me a much deeper appreciation for the process and the intention behind growing those flowers,” she said.

Though she did, at first, try out more commercial ways of sourcing flowers.

“It sucked the joy out of it,” she said.

Afterwards, she committed herself to making her small business one that respects both farmers and their flowers.

Unlike traditional floral shops, Locaflora uses no chemicals or floral foam, composts regularly, and reuses much of their glassware. The business involves very little waste, while helping to support local farmers and their families.

“I consider myself a sustainable florist,” Muller said. “We’re trying to value both people and planet ahead of money.”

After high school, Muller attended Harrisburg University of Science and Technology. HU, she said, “had a really big impact on who I became and what I wanted to do.”

“I loved the connection with multiple cultures,” she said. “I felt very much alive.”

She began providing wedding florals on the side while studying for her degree in biochemistry.

After graduating, Muller became a fellow at the Foundry in Harrisburg, whose task is to build “creativity, communication, collaboration and critical thinking” through STEAM projects in K-12 schools while enabling fellows to hone their own talents. It is a hub of intellectual and creative expertise.

“I was impressed by the people who took their ideas and made them happen,” she said. “Having a group of people who believed in me gave me the confidence to open my business,” which she did, officially, in November 2020.

But does Muller’s science background overlap at all with her current work? She believes that the shop would not exist without her science knowledge base.

“The scientific process is very similar to the design process,” she said. “Ideation based on research, testing, redoing it, and…once you’ve tried it, [seeing if it’s] at the stage you want it to be, and if it’s not, you try again.”

In addition to flowers, Locaflora offers plants and handmade gifts, such as planters and cards, which bring another interpersonal aspect to the shop.

“I know every single one of our makers,” she said. “I try to find people we identify with a lot.”

This might include craftspeople who source locally, who have a passion for sustainability, whose works tell local stories or who are intentional about inclusivity. Muller wants products that cater to customers who also value these things. She wants her shop to be a safe place for everyone—college students and locals alike.

“I have tried to be inclusive,” she said, “appealing to people who don’t feel like they have a floral shop to identify with.”

While the shop does weddings and other big events, Muller’s passion lies in the small, everyday moments that flowers can highlight.

“I’m very much an ordinary day kind of person,” she said. “In little moments of sadness or joy, flowers make a huge difference.”