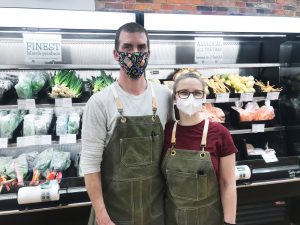 Lately, it seems as if every time I walk along 3rd Street in Harrisburg, a new business, restaurant or shop has opened.

It’s thrilling to see and carries with it a feeling of momentum and hope. From a historical perspective, too, it feels more than fitting, given that many decades ago this street was home to a vibrant shopping district.

Amid the last days of February, Radish & Rye Food Hub became a welcome addition to this streetscape of entrepreneurial spirit and community pride. The shop, located on the 1300-block of N. 3rd, is an all-local grocer that exclusively carries foods from producers and farmers within a 150-mile radius of Harrisburg.

The business is a labor of love for Midtown residents Dusty and Julia James, who opened their store five years ago in the Broad Street Market before migrating across the street into their own brick-and-mortar.

“We’re not a supermarket, but more of a green grocer,” explained Dusty, of their approach.

There are numerous reasons behind Radish and Rye’s all-local focus, but environmental, economic and culinary get top billing.

When you step inside the store, you find yourself in a bright, welcoming space. Shelves full of pantry items stand at the ready, and sleek cases line the walls, filled with milk, artisanal cheeses, meats and fresh vegetables. Baskets of fresh bread sit atop a table, and the aroma of locally roasted coffee floats subtly in the air.

Thanks to a fully equipped commercial kitchen, prepared foods are an exciting addition to Radish & Rye’s offerings in the new space. Currently, they offer housemade stocks, soups and hummus, but have plans to expand this to include prepared meals.

“One of our goals is to offer food in every state of preparedness,” Dusty noted. “We want to help address the fallacy that only people who can cook from scratch every night can shop at a store like Radish & Rye.”

So, why the decision to scale up from a market stand to a brick-and-mortar store?

As Radish & Rye’s market stand grew, so did demand.

“Eventually, it felt like an obvious thing to do,” Julia said. “One of the things we have always loved most about the business is being part of the community. We loved what we were doing. We had energy around it, there was a clear need in the community, and the farmers and producers had the product.”

So in 2017, the couple purchased the property that now houses their store. They developed a plan and gathered funding, but a few, rather significant bumps extended their timeline—namely, unexpected construction issues coupled with, well, a global pandemic.

In March 2020, instead of planning for a grand opening, Dusty and Julia executed a rather masterful pivot to online fulfillment, contactless pickup, and seven-day-a-week hours of operation. Eventually, they dialed it back to a modest six—Tuesday through Sunday.

“It went pretty suddenly from ‘maybe this is something we should be considering’ to ‘this is something we have to do,’ and so we just did it,” Julia said, explaining their quick transition to creating an online ordering platform. “It took about a week straight of no sleep.”

This journey from market stand to storefront typifies the kind of people behind Radish & Rye.

Dusty and Julia have long been committed to providing an extensive, reliable, humane and nutritious food source for the community. Even amid a pandemic and numerous business challenges, they proved themselves to be people who do not run from a challenge or resist creating a solution when they can provide one.

For another perspective, I spoke with Gary and Kali Tennis, Radish & Rye customers and Midtown Harrisburg residents who moved here in 2012. The couple spoke about their deep appreciation for Radish & Rye and the role it plays in their adopted hometown.

“If you care about climate change, responsible, sustainable agriculture and healthy eating, Radish & Rye checks all the boxes,” Gary explained. “I often describe them as a local grocer, and they really are.”

“You get so much more than just food there,” she said.  “It really is a community-binding force.”

So what does it mean to have gotten to this point?

“I feel really proud, in a lot of ways, for what we’ve been able to accomplish, but also so grateful,” Dusty said. “From grant money to the sweat equity and financial support of friends and family—the support from every part of our community and our customers has been amazing and kept us going when things were really hard.”

Julia also emphasized that the opening of the store went beyond just the two of them.

“Our team deserves a huge shout-out, too,” she said. “As much as Dusty and I have been working on this, there’s still so much that they do to keep things running. They’re doing such a great job.”

When people talk about what makes Harrisburg special, Radish & Rye is an example of how a community is a reflection of the people who inhabit it.

We Re-Built This City: Harrisburg hasn’t experienced this much development in a century. What’s driving the trend?

Dreams Don’t Wait: Despite a year of the pandemic, many small businesses chose to open up shop