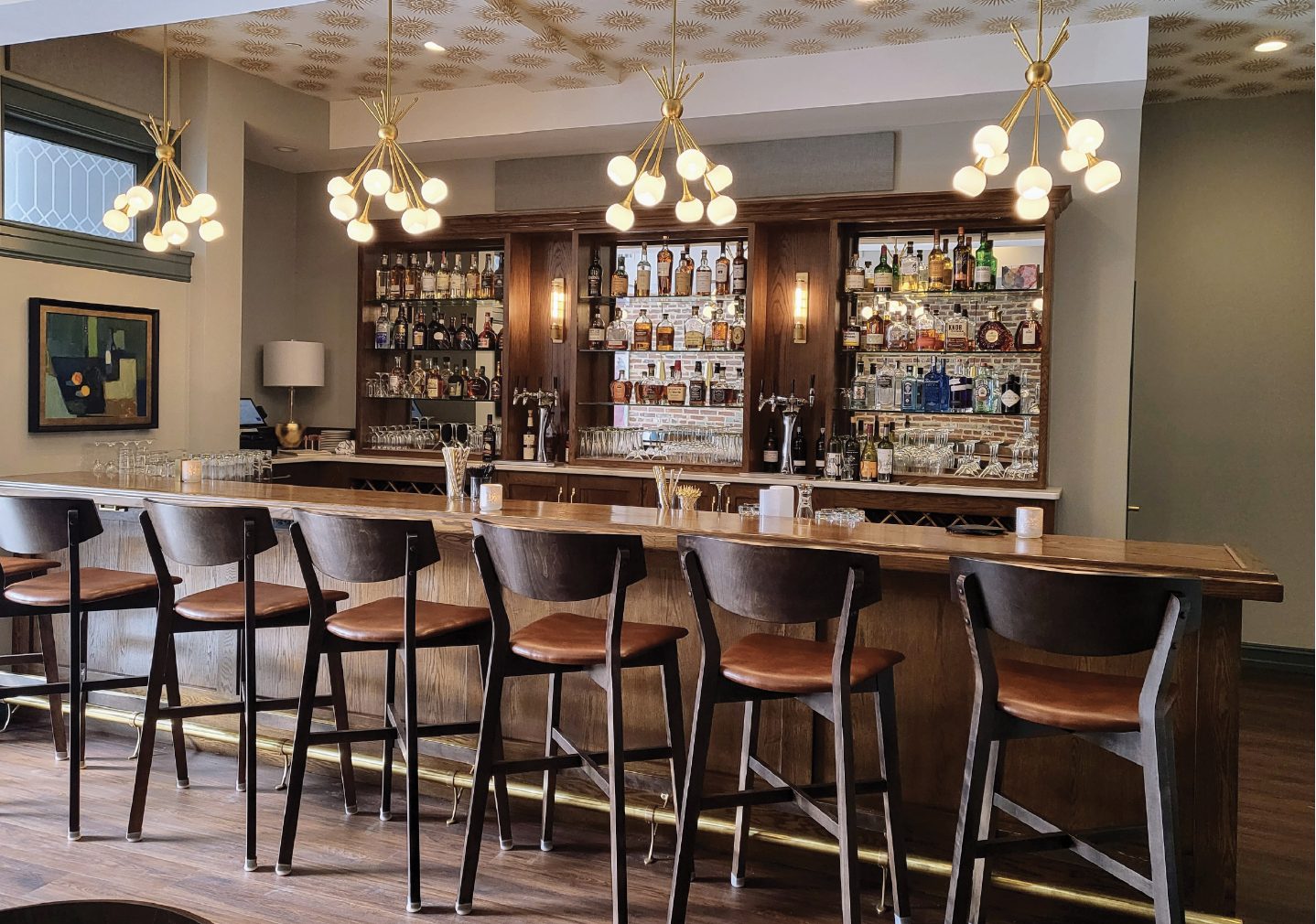 The pandemic has left empty spaces throughout once-busy downtowns, as so many restaurants closed temporarily, then shut down permanently.

For instance, in Carlisle, Brick Kitchen and Bar closed in late 2020, leaving a big hole right on W. High Street.

But they didn’t just replace one restaurant with another. They purchased an adjacent photography studio to double the restaurant’s square footage, while adding an upscale casual option to the downtown’s dining scene.

The restaurant now accommodates about 125 customers, the interior designed with the help of Julie Estes, owner of Carlisle Design Interiors & Consulting Group, who worked with the Carlisle Arts Center to bring in some original artwork. One painting depicts a person riding a bike on a highwire.

“That sometimes feels like us when it comes to opening a restaurant,” Rockwood quipped.

A mid-century modern aesthetic is achieved through lighting that is comprised of pendants, sconces and sputnik chandeliers. Perhaps that’s what the owners had in mind when they named “The Draper,” a cocktail made with Bulleit rye, Averna amaro, orange bitters and a Luxardo cherry.

Some may also recall the wall of windows located at the back of the building. These days, the scene is made even more dramatic with the addition of light fixtures that resemble twinkly sunbursts.

Customers also may be curious about the imposing painting of a gentleman who oversees the wooden bar in the front area. Estes explained that it’s a rendering of her grandfather, painted by her grandmother.

According to the owners, the former restaurant’s noisy ambiance presented a problem, so soundproofing became a priority. The space was expanded, chair glides were added to table legs to keep them from squeaking on the wooden floors, and tufted booths were installed. Most ingenious, however, was the addition of attractive art that not only decorates but acts as sound panels.

The globally inspired one-page menu at One13 Social consists of small plates like Korean BBQ ribs and grilled oysters, a selection of salads like kale Caesar and poached pear, and sandwiches like the softshell crab po’ boy and the Carwood smash burger, which is comprised of locally raised beef, roasted garlic aioli, cooper cheese, grilled onions, lettuce, tomato and bacon, served on a brioche bun.

A selection of six entrees rounds out the menu and includes scampi gnocchi, salmon au poive and Argentinian flank steak. Sourcing stays local too, with purveyors like Talking Breads in Mechanicsburg and Carwood Farms in Boiling Springs.

Rockwood said that their house cocktails have been well received. These include the Carlisle sour, the Jalisco margarita, the aforementioned Draper, the Bella and the Lemontini. Beer is served by the draft, can and bottle, and wine selections hail from places like Italy, France, Spain and, of course, California.

“Carlisle was in desperate need of a place like this,” said the Boiling Springs resident. “It’s upscale, yet comfortable, and they make you feel so welcome.”

“I like the fact that the beef is local,” she said, adding that she’s also enjoyed the salmon au poivre. “It was delicious and beautifully presented.”

So far, the biggest hit for her has been the grilled oyster appetizer, with chipotle, garlic butter, wild boar bacon lardons and Oaxacan cheese crisp.

“Now, that was just delicious,” she said.

Melissa Foreman patronizes the place about twice a week and declares the Korean BBQ ribs her favorite.

“The meat falls off the bone,” she said.

As for drinks, the Carlisle resident recommends the Lemontini and the old fashioned.

“The bartenders are experts, so their cocktails are always on point,” she said.

Rockwood said that it’s great to walk to work these days. It’s obvious that he enjoys his new venture as he makes his way around the restaurant greeting people. He reiterated that he and his partners are happy to be investing in Carlisle.

“They own the building, and I was born and raised here in Carlisle,” he said. “Both of them have children who attend school here. So, we want to do our part to make this a positive part of the Carlisle community.”

One13 Social is located at 113 W. High St, Carlisle. For more information, visit www.one13social.com or their Facebook page.