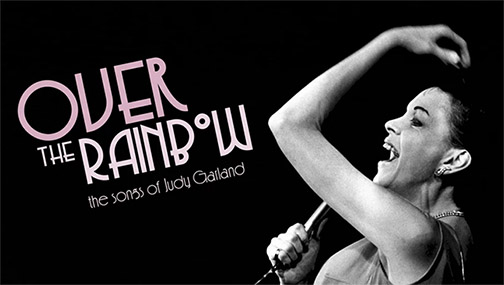 Aside from Judy Garland’s signature movie songs, “Over the Rainbow” and “Zing! Went the Strings of My Heart,” you might not recognize the remainder of the song selections. This isn’t mainstream Judy following the yellow brick road or in St. Louis in a horse-drawn sleigh during MGM’s “Golden Age” of Hollywood. This is a tribute to Judy’s lounge act, with the audience playing the role of her most enduring fans seated in a nightclub.

Open Stage does not need to alter itself much to evoke the look and feel of a venue where Judy Garland might have played way back when. To borrow lyrics from another band contemporary to Ms. Garland, everything inside is already painted black. Her black-and-white pictures, blown up as the background, show an unsmiling, faraway Judy—a tragic figure of entertainment who glittered on the outside and recoiled on the inside.

It is that sense of bittersweet melancholy that drives the music and the outward glamor that inspires the costumes. Each of Open Stage’s performers wears something Judy Garland herself might have worn: sparkles, lace, a pencil skirt, ruby slippers, 1941 Victory Red lipstick.

Open Stage’s Judys diverge in the vocal approaches, with all the talented ladies showcasing their signature ranges and styles. With the singers alternating who takes the stage, there is very little pesky narrative and audience interaction to interrupt the flow of all the great music. Most of the numbers are solos, and in a few, all three come together with harmonies that hit the ear just right.

Carly Lafferty’s approach to Judy Garland reminds me of the young, red-headed Esther Smith in “Meet Me in St. Louis,” except that Lafferty’s hair is minus those hideous bangs that must have been popular in 1903. She starts out in a bright voice, the high register that youthful Judy had before life’s burdens set in. Lafferty is able to make a real connection with her audience. After months of theater delivered over Zoom and YouTube, I had forgotten what a strangely intimate act eye contact is while singing from the stage.

Rachel Landon’s rendition of Judy Garland draws more from her Vaudevillian career. With her cute pin curls and playful unrestraint, Landon’s plucky interpretations play best on the rollicking show tunes. Then she digs deeper on the more soulful ballads, hinting at how many times her heart must have been broken. She sings with the same faraway look in her eyes as Judy does, looking way above the cameras into the distance.

Bluesy Stacey Werner has a strong, flinty voice that lends perfectly to both the jazzy ragtime and the wistfully sad songs Ms. Garland sang in her more mature years. I may have been mistaken, but I think I heard Werner’s register once hit a note in the baritone range. Her sultry pipes perfectly conjured Judy’s turmoil, with a commanding stage presence that is obvious, front and center.

All three Judys were playfully affectionate with each other during some of the numbers. The more they enjoyed themselves, the more that energy rubbed off on the audience.

If you are a Judy fan, or even if you just like a well-sung, retro lounge act, this show is (as Judy said herself) the berries!

“Over the Rainbow: The Songs of Judy Garland” will run in-person shows May 28 to June 25 at Open Stage, 25 N. Court St., Harrisburg. For dates and times, visit www.openstagehbg.com/show/judy. There will also be a special presentation at the Italian Lake Pavilion in Harrisburg on June 25 at 7 p.m.