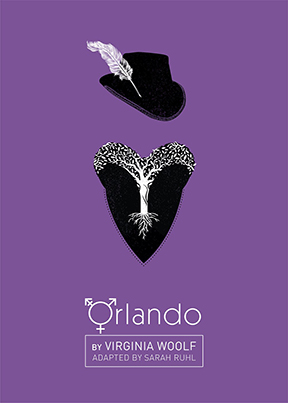 Who’s afraid of (interpreting) Virginia Woolf? Turns out, many people.

Her works are not easy reads, so her plays are often complex viewing experiences. As an audience, we want to leave the theater with tidily presented answers, wrapped in pretty paper and topped with ribbons. We want to snap all 1000 pieces of the double-sided jigsaw puzzle into place, to feel that satisfying ending.

Although you will long for that gratification, no conclusion is promised with Gamut Theatre’s rendition of “Orlando,” adapted by Sarah Ruhl, directed by Francesca Amendolia, and presented in partnership with the PA Coalition for Trans Youth. “Orlando” tackles layered themes, with an imagery-filled format that is simultaneously encrypted, yet illuminated through narration of inner dialogue by the characters.

We meet Orlando (Abby Carroll) trying to write a poem as a 16-year-old boy during the 17th-century Elizabethan era. Throughout the play, we find this same character pecking at this same piece over the timespan of 500 years (not a typo), each time struggling to find the words. Each time Orlando sits down to write, the approach is different. Because now Orlando is different.

Returning to that poem over time becomes an allegory for Orlando’s life. Just when he thinks he can define it with words, it shifts out of bounds into something unexpected, like a sleepy dream sequence in a stream of consciousness, with any sense of chronology it may have had off in a basement somewhere chewing magic mushrooms. To really appreciate Orlando’s hero’s journey is to be comfortable with ambiguity, with the perpetual motion, and with the eventuality that you will feel even more shifts to come. Parameters – if you find any – will move, morph and even vanish.

Highlights of Orlando’s life: serving with the Queen’s (Jeff Luttermoser) court, falling in love while ice-skating on the Thames River with Sasha the Russian princess (Grace Hoover), seeking adventure in Constantinople, being persistently and cringingly wooed by an Archduke/Archduchess (Terri Mastrobuono), getting married to a man (Ross Carmichael) who wonders aloud if Orlando is a man because it only takes her 10 minutes to get ready.

So much about Orlando’s character changes throughout his long life, including his gender. He awakens after a seven-day cocoon and finds that he is now a woman. With the gift of having a basis for comparison, we see an interpretation of male and female gender definitions through Orlando’s eyes. She notices how the world treats women differently over the centuries. Fashion changes from high-collared dresses and corsets to pants. Hankies drop. Hormones now make her cry. Her coarse language is looked on as uncharacteristic of how a female should behave. It’s all very puzzling to her. When Orlando finally comes back home again, she has become too different for home to feel the same.

So, does Orlando figure out who Orlando is at the end? The ending isn’t the point. The introspective journey is. Orlando is only able to finish her poem because, according to Amendolia, “not because she knows who she is, but because she accepts the search will never end in certainty.”

To truly appreciate “Orlando,” bring your mind open wide, but leave any urges for literal interpretations or boundaries at home. They will only hinder the fluidity and the continuous examination the author casually suggests, like buoys in tempestuous seas. Were you to exchange opinions about this piece with nine other readers in a reading circle, you would likely come away with 20 different opinions. The waters are deep and opaque here.

Bravo/brava to cast and crew for tackling this complicated piece. Although the jigsaw puzzle likely has pieces missing and the ribbons lay frayed at the ends, Orlando still satisfies like deep, meandering conversation with someone who asks the right questions.