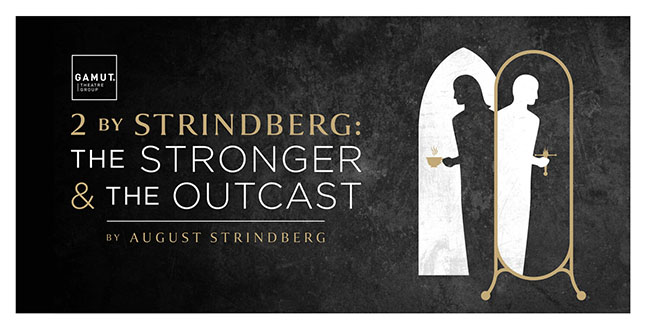 Reprising their status as the only local theater open to live audiences (with COVID safety protocols), Gamut Theatre delivers “2 By Strindberg,” consisting of two of August Strindberg’s one-act plays: “The Stronger” and “The Outcast,” both experimental works highlighting toxic dynamics between “frenemies.” Each vignette unfolds like a mini-soap opera with talented actors thoughtfully breathing vulnerabilities into unlikeable characters.

The audience is either meeting dreadful people or we interlope into their lives while they interact with the very person who brings out their worst. These particular Strindberg characters from the late 19th/early 20th centuries embody the ideals of racism and misogyny that we modern folk rally against. But the fact that they’re hardly sympathetic characters sends the message that they are on the wrong side of history.

At times, I rooted for the least objectionable of each acting duo. Other times, I said “Boo!” into my mask when the more villainous one deserved it. But, in the same way I watch “Animal Kingdom” as my version of combat sports, I kept score on the plays’ human animals as they overtook and preyed on their opponents, my loyalties shifting, depending on who was “winning.”

In the spirit of Strindberg’s experimentation, the Gamut troupe brings us two distinct interpretations of the same script, “The Stronger.” By changing just a few key components, directors Francesca Amendolia (Version A) and Kim Greenawalt (Version B) take us on the same journey, but each offers a different dynamic ending in two different destinations.

We meet Mrs. X and Ms. Y (Erin Shellenberger and Abby Carroll, interchangeably), romantic rivals who awkwardly dissect their tedious relationship in a café. In the second version, the actors swap roles, bringing new elements to each character. Another notable part of this experiment is that one character prattles on for a 20-minute monologue while the other communicates non-verbally.

According to Amendolia, the directors only discussed the text in the beginning. Then after a certain point, their creative directions forked in the road. That needed to happen to differentiate the stories, and it worked.

Director Clark Nicholson describes “The Outcast” as a “weird, ethical Sherlock Holmes story.” He likened the process of interpreting the piece through rehearsals as putting together a jigsaw puzzle with no picture on the box to work from, yielding “two very, very flawed human beings who don’t know the difference between right and wrong.”

In the same experimental vein, “The Outcast” outlines a contentious relationship between Mr. X (Ross Carmichael) and Mr. Y (Lyeneal Griffin) (no relation to the previous, similarly named characters), who are vying for dominance. Today we would label it toxic masculinity. Their conflict starts off as verbally intimidating. In conversation, Mr. X tips his hand because lording his intelligence over the other is too delicious to resist. Mr. Y can’t help but show his hand because he didn’t have the strength to hold it steady. Then their interactions turn threateningly physical, with emotional twists akin to a psychological drama.

In keeping with Gamut’s pledge that Black Lives Matter, the play adds commentary on prison system inequality. Years ago, it would have whipped over my head that a white man got off scot-free while a black man went to prison for a lesser offense. Feel free to write and tell my editor that my privilege is showing. You would be right.

It’s fun to speculate where Strindberg was aiming when he wrote each play. Strindberg himself was a radical counter-culturalist, embedding his unpopular opinions and hypocritical characters within his works. One of his espoused ideals that surfaces in “The Outcast” is eugenics – arguing which person is “worth more” based on certain tenets.

Uncomfortable at times, the plays will make you think long after the proverbial curtain calls. Kudos to the Gamut players for tackling the unpopular and for delving into some compelling conflict.

“2 By Strindberg” runs through April 25, Fridays and Saturdays at 7:30 p.m. and Sundays at 2:30 p.m. There is also a live “Talkback Discussion” via Zoom on April 26 at 6 p.m. Tickets must be reserved online in advance, and in keeping with COVID-19 protocols, will not be available at the door. Tickets are available for purchase through Gamut Theatre’s website at www.gamuttheatre.org/tickets.