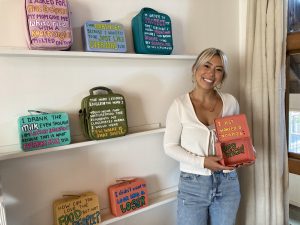 Amie Bantz and some her lunchboxes that will be part of her “Lunchbox Moments” exhibit.

The school lunchroom can be a stressful place for kids. Who do you sit with? Whose mom packed them a lunch? Who gets the free lunch?

It’s even more anxiety-inducing when your food doesn’t look like all the other kids’.

In Harrisburg artist Amie Bantz’s upcoming exhibit, she unboxes the shared story that many Asian Americans have had in the cafeteria when their peers react to their traditional Asian food.

“I have a story, my mom has a story, all of my friends have stories,” she said. “I feel like that creates a collective narrative and identity.”

Bantz and other Asian Americans from the community painted about 90 lunchboxes with phrases and short stories from their own experiences with food. The boxes, along with other selections of Bantz’s art, will hang in the Carlisle Arts Learning Center next month.

As a Korean American, Bantz remembers having these “lunchbox moments” as a kid. Some of those memories are a part of the exhibit—like the time she asked her mom, a South Korean immigrant, to make mac and cheese, and she melted a Kraft single on top of white rice. Or there was the time she got in line to get a box of milk at lunch because all of the other kids were doing it, even though she was lactose intolerant, which she said is common among people of Asian descent.

“I really wanted it to be a little bit of humor, a little bit of seriousness, but ultimately just showcasing the Asian American experience in America through this one lens,” Bantz said.

As much as the project was a cathartic experience for Bantz, it was impactful to those from the community who she included, as well. She hosted classes to allow people to share their lunchbox moments and paint them on a lunchbox to be included in the show. The stories, she said, are even more emotional and impactful than she imagined.

“A lot of the folks that came to the workshops, I don’t think they realized that other people had that same moment,” she said. “I want other Asian Americans to be able to walk into that gallery and see all of the lunchboxes and stories and be like ‘oh, these are my people, they get it.’”

Bantz’s show comes on the heels of many instances of Asian hate crimes in the United States during the pandemic. She hopes that her exhibit keeps the conversation around the issue going, while also allowing room for people to giggle and smile a bit.

The exhibit will also include an interactive piece for people to share their lunchbox moments, reactions to the exhibit and stories of not fitting in. She hopes that community members of all cultures and races will participate.

“The only way to reduce hate is if we find common ground,” Bantz said. “That’s the whole premise of the show.”

“Lunchbox Moments” will be on display at the Carlisle Arts Learning Center from Aug. 6 to Sept. 18 in their 2nd floor gallery. For more information, visit Amie Bantz’s website.