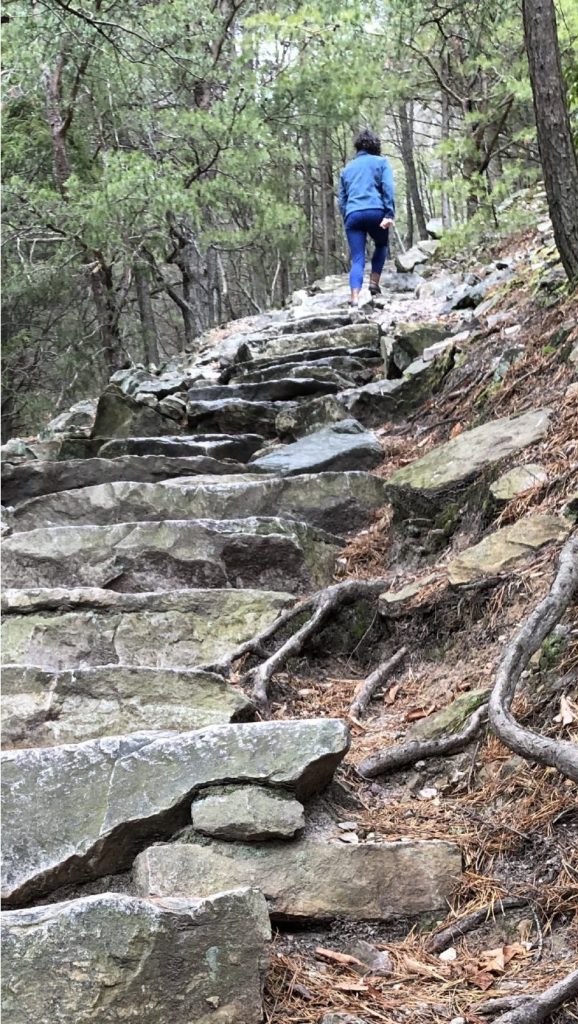 Lots of people count their steps every day. But there’s one area trail where you’re guaranteed to boost your total by a thousand steps.

Additionally, every footstep on the Thousand Steps Trail is a step back in time, up stone staircases built 85 years ago into the side of Jacks Mountain.

The reward for reaching 1,036 steps at the top? A spectacular vista. The Juniata River carves the deepest gorge in Pennsylvania—Jack’s Narrows— splitting Jacks Mountain in two.

Hot on the Trail

“The Thousand Steps Trail… is by far the busiest in the six-county region,” said Matt Price, executive director of the Huntingdon County Visitors Bureau.

Just west of Mount Union along U.S. Route 22, dozens of cars are typically parked, because tucked into the woods is the starting point for the Thousand Steps Trail.

“It’s popular because of its accessibility from a busy highway, but it’s also the mix of the physical challenge of it, and its history,” said Price.

Today, the Thousand Steps Trail is one tiny segment—half a mile—of the 84-mile Standing Stone Trail, which links to a trail system traversing the width of Pennsylvania, and, ultimately, the Great Eastern Trail, which stretches from Alabama to New York.

“The appeal of the Thousand Steps for a lot of people—number one, it’s a challenge. But I think there’s also nostalgia,” said George Conrad, president of the nonprofit Standing Stone Trail Club. “It’s the nostalgia of putting yourself in the shoes of quarrymen going to work every day.”

Back in 1936, the steps weren’t created for recreation.

“Mount Union at one point was the brick capital of the world,” Conrad said. “One of the things it was famous for was firebricks that lined kilns for the steel industry, and, in order to make them, they used the silica atop the mountains.”

In the early 1900s, workers built a gravity railroad into Jacks Mountain to streamline the mining process. They sent rock-filled carts down the incline, across a bridge spanning the Juniata, to the brickmaking plant. The weight of the heavy, descending carts pulled the empty carts back atop the mountain, to the workers.

Think about their commute. Quarrymen, in order to get to their mountaintop worksite, hiked up the mountain every day.

But in the spring of 1936, the Juniata River flooded, wiping out the bridge and cutting off the carts’ connection. Production slowed while repairs were made.

In order to stay employed, the workers—ingeniously—built steps from the mountain’s plentiful ganister rocks. They turned a wild, rock-strewn mountainside into an organized, somewhat jaunty, series of stone staircases.

“They used the steps till the 1950s, then everything shut down and stood idle until the late ’70s or early ’80s,” said Conrad. “Tom Thwaites, who designed the Mid State Trail—he was a Penn State professor—he used the Thousand Steps to connect it together.”

By the mid-’90s, with people already using the trail, the quarry owner agreed to sell the property to the Keystone Trails Association. Donors funded the purchase by contributing $100 per step, and the land was gifted to the Pennsylvania Game Commission.

Historical clues intertwine with nature along the trail.

Hikers who continue just a short distance past the final stone steps atop the mountain will see a large stone building, the “dinkey shed,” once used for the narrow-gauge railway’s maintenance.

While hundreds hike the Standing Stone Trail annually, thousands flock to the tiny Thousand Steps segment—which leaves Conrad and others working behind the scenes to ensure its popularity doesn’t become its downfall.

An estimated 20,000 visitors hiked the Thousand Steps Trail annually, pre-pandemic. Fortuitously, trail counters were installed in 2019. Amid the pandemic in 2020, with more people seeking outdoor recreation, usage soared to a documented 42,000 visits.

“We all love the steps, but how do we maintain them?” asked Conrad. “The quarrymen built the steps for their use. Today, with tens of thousands of people on them, they’re not going to be there forever unless they receive some attention.”

That’s why Conrad recently met with state Rep. Rich Irvin (R-81) to make him aware of the issue.

“Specific to the steps, we need to shore them up, to make sure none are loose,” said Conrad. “Every time someone steps on them, it adds a little more stress, and there could be a point when we have to re-do the steps. That’s what I want people to realize.”

For more information on the Thousand Steps and Standing Stone Trails, including how to become a trail club member or make a donation, visit standingstonetrail.org.

Heart in Harrisburg: As Dennis Green achieved greatness, he took his hometown with him

In the Heart of History: Seminary Ridge Museum occupies one of the most historically significant structures in Gettysburg