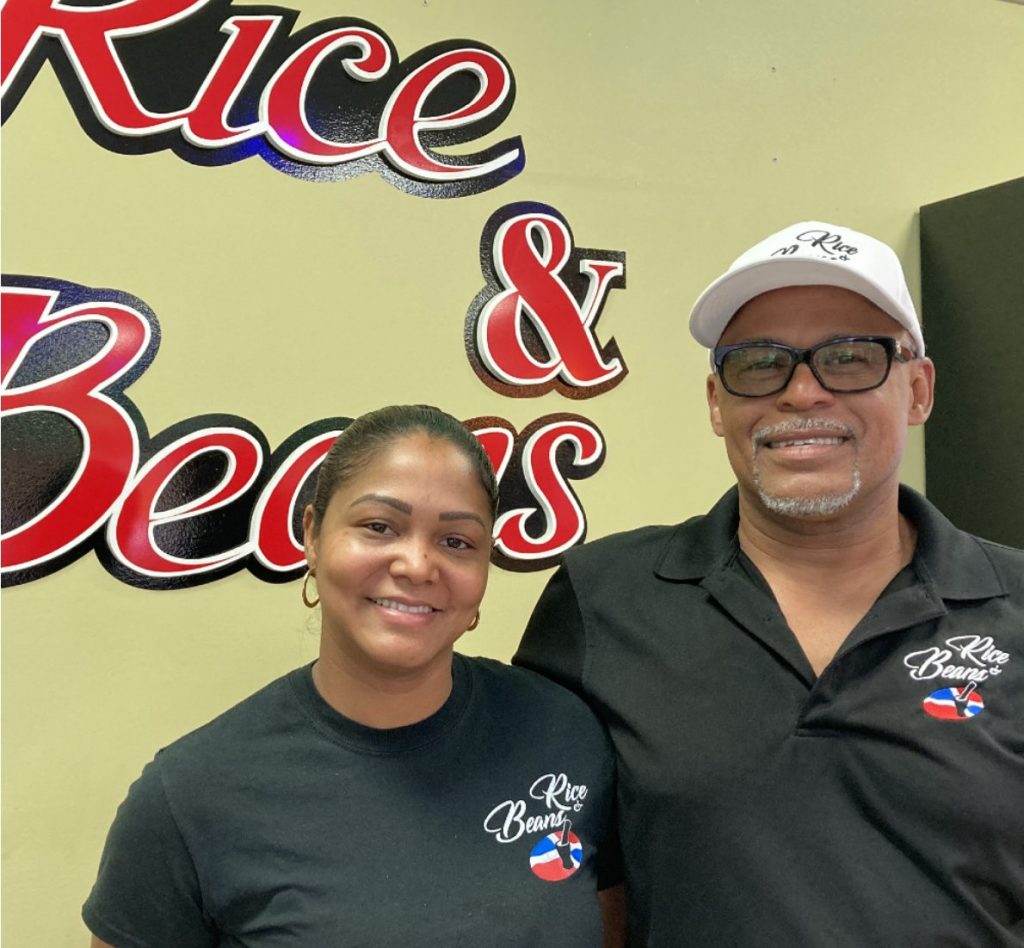 When I walked into Rice & Beans restaurant, I joined a line of hungry customers who, like myself, were eagerly awaiting a lunchtime meal.

The people in front of me ordered like they were regulars, pointing at food behind the glass and naming dishes in Spanish.

When I got to the counter, I was met by Jose Pichardo, who owns Rice & Beans with his wife, Starlyn Rivera.

“I’ve never been here before,” I said behind my mask.

“Well, I’m sorry for you that you haven’t, my dear,” Pichardo said with a grin.

He pointed out the many variations of chicken, pork, beef, oxtail and, of course, rice and beans.

I settled on some chicken, rice and fried plantains.

Pichardo and Rivera are confident in their product. According to the couple, there’s nothing like their Caribbean-style food in Harrisburg. Pichardo described his cuisine as including flavors from the Dominican Republic (his home country), Colombia and Puerto Rico, among others. The dishes are both traditional and unique.

The authentic flavor at Rice & Beans is something Pichardo worked for years to develop. Back in the Dominican Republic, he cooked in a five-star hotel before taking his skill to a cruise ship kitchen. Eventually, he landed in New York, opening his own restaurant, also named Rice & Beans, and running it for 18 years.

But Rivera and Pichardo had children, and living in New York wasn’t cheap. One of their cousins invited them to Harrisburg to look around and Rivera fell in love with the idea of living in a bigger home in a quieter area. Pichardo saw the potential for bringing his Spanish-fusion cuisine to Allison Hill.

“There’s nobody here that has the same concept as us,” he said.

After months of renovation to the building on S. 17th Street, the couple opened up shop in February 2019. They struggled at first with finding employees, but saw no shortage of customers.

“We’ve been busy since the beginning,” Rivera said. “We didn’t expect that.”

I visited Rice & Beans twice, once on a sunny day at lunchtime and then the next day, in the rainy late afternoon. The latter was supposed to be a “slower” time at the restaurant, better for an interview, but still, a steady flow of customers streamed in. Pichardo and Rivera are used to being busy. Even during the COVID-19 pandemic, they didn’t lose many customers, thanks to the thriving to-go aspect of their business.

Pichardo said that, when they first opened, he was working 17-hour days. The pair barely had time to sleep or spend time with their kids. Now, they have about 10 employees and work around 11-hour days—still difficult, but manageable.

“We try to do the best in what we do,” Pichardo said. “I want customers to really taste the difference when they try my food.”

At Rice & Beans, the staff’s hard work is met with a similar dedication from customers. Simon and Jazmine Arias have frequented the restaurant at least three times each week since it opened.

“This is our spot,” Simon said. “We needed a place like this. We would have to travel for food like this.”

The pair has a high bar for Spanish-style food. Simon is from the Dominican Republic and Jazmine from Puerto Rico. They gave Rice & Beans rave reviews, going on about the authenticity, the atmosphere and even the details, like the free samples.

Simon ordered the mofongo, a Puerto Rican dish that includes mashed fried plantains and often seafood or chicken. It’s a customer favorite, according to Pichardo, and Simon’s go-to order, as well. Not everyone can make mofongo right, Simon said.

He also pointed out their fresh juices that “hit the spot.”

“When we come here, we are ordering straight island food,” he said. “It feels like we are at home.”

Rivera said that they’ve developed a base of regular customers, a diverse bunch. People from all over the city with different cultures, races and languages come in to dine. Some people have even come from an hour away just to eat at Rice & Beans. That’s what makes it all worth it.