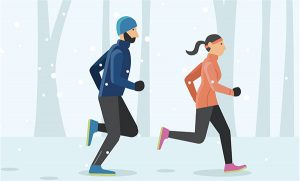 Usage of the Capital Area Greenbelt has soared upwards of 400% since the pandemic.

“It may sound crazy, but it’s a believable number,” said Dick Norford, spokesperson for the Capital Area Greenbelt Association (CAGA).

He admits that it’s difficult to accurately count and track visitors along the 20-mile path encircling Harrisburg, but CAGA puts usage estimates from 500,000 to 1 million people during a typical year.

That means that as many as 2 to 4 million people hit the Greenbelt in 2020 to ease their cabin fever, get outside and work out their pandemic stress by walking, running, biking or even rollerblading.

It’s a pattern repeating itself across central Pennsylvania, especially since many gyms remain closed.

Hit the Road, the Trail

“From the customer standpoint, we’re seeing a lot of newer runners and people taking up running again because they’re stuck in the house, and they want to get out and do something—they’re all coming in to purchase shoes,” said Katie Larsen, store manager at Carlisle’s Appalachian Running Company.

Colder temperatures don’t have to put the brakes on healthy habits.

That’s why, year-round, the store hosts two free group runs every week, led by Linda Reilly, Appalachian’s assistant manager. On Wednesday evenings, she guides runners on a three to five-mile run around town—socially distanced during this era of COVID-19. Runners of all paces are welcome.

“It motivates people to come out, even if it’s cold,” said Reilly, who doesn’t mind running through snowy—but not icy—weather.

On Saturdays, she leads runs on the Appalachian Trail.

“It’s an amazing workout because you’re using different muscles depending on the terrain or the day,” Reilly said. “I feel like the trail always motivates you, because you want to go explore and have fun.”

Runners who want to start the new year off on the right foot can join Fleet Feet Mechanicsburg’s Running Club, which kicks off a new round of running programs in January. Training groups, meeting twice a week in small bubbles, range from beginning runners to those targeting a marathon.

“Having accountability is one of the most important aspects of staying active in winter months,” said Fred Joslyn, Fleet Feet Mechanicsburg’s co-owner and running coach.

Dressing for the weather can be challenging for runners, but Joslyn shares a handy rule of thumb: add 20 degrees to the outdoor temperature, and dress as if that’s the actual temperature. So, if it’s 32 degrees, dress as if it’s 52 because once you get moving, you’ll likely feel like that’s the temperature.

“It’s important to warm up, especially in cold weather. Sometimes, some light walking before running can help,” Joslyn said. “I try to keep my first 10 minutes very easy, to allow blood flow and muscle elasticity, as I get into my run or walk.”

Well-fitting running clothes are essential in the winter.

“Something that is too tight or too loose won’t keep your body the right temperature,” Joslyn said.

He also advises runners to dress in layers for flexibility in unzipping or removing layers as needed and to avoid cotton, which absorbs moisture.

Convertible running gear is the key to Emily Melton’s winter routine. The Harrisburg Area Road Runners Club president likes to cover her fingers, neck and ears—but she likes options. She starts every run with her fingers covered, but convertible gloves allow her to change things up when her hands warm up into the run.

“I also like Buffs because they have many uses and are lightweight—I can use my Buff as a neck gaiter, ear warmer or even a hat,” Melton said. “I love the fact that they can easily convert from one to the other.”

Consistency is another key to winter fitness.

“For many years, I ran along the river [in Harrisburg] almost every day at lunchtime. I had people to meet and regular routes to run,” said Karen Mitchell, president of the York Road Runners Club.

Scheduling your runs for the same time and days can establish a pattern that embraces the conditions, even if they’re cold, rainy or snowy. Midday runs avoid the coldest and darkest parts of the day. But lights and reflective gear can make early-morning or evening runs safe experiences.

“Learn to love all kinds of weather,” Mitchell said. “But don’t mess with ice—wear slip-on spikes.”

Just as it takes walkers and runners time to adapt to colder temperatures, it generally takes bikers 30 minutes or six miles to feel comfortable, according to Cindy Gorski, a current member and past president of the Harrisburg Bicycle Club. Amid the pandemic, most members are riding solo or in small bubble groups.

Before heading out for a spin, Gorski recommends cyclists layer up from head to toe— including a layer under your helmet—plus a windbreaker.

“Wool is an ideal winter bicycling material because it doesn’t absorb moisture,” Gorski said. “Your extremities like your ears, hands and feet require extra care—make sure layers don’t make your shoes and gloves too tight, thus restricting your blood flow.”

She reminds winter bikers to hydrate—something they are usually more attuned to during sweltering summer days.

“I ride year round, and I will say, my riding has kept me sane during this pandemic,” Gorski said. “My riding always gives me a sense of freedom, what I call a mini-vacation.”

Motivation can go a long way toward helping walkers, runners or bikers get out the door through the winter months.

“I congratulate myself when I do get out there,” said Emily Melton, president of the Harrisburg Area Road Runners Club. “Some days will be easier than others… don’t tear yourself down if you don’t make it outside or if you don’t go as far as you planned… be proud of what you’ve done and plan for the next day.”

“Getting outside and exercising are two of the best things for our mental health,” said Fred Joslyn, co-owner of Fleet Feet Mechanicsburg. “The physical benefits are well known, but it is often overlooked how important being outside and moving are for our mental wellness. The biggest hurdle is typically getting ourselves started. So, take the first step, you’ll be glad you did!”

Another mental health booster is the winter season’s beauty.

“Winter riding can be very beautiful, and the terrain is so different than in the summer,” said Cindy Gorski, a Harrisburg Bicycle Club past president who has personally biked more than 100,000 miles through all seasons.

“The lack of foliage on the trees and bushes opens up scenic views that are hidden during the rest of the year. The beauty of snow-covered fields with evergreens and green moss along the creeks is breathtaking,” Gorski said. “Getting out in the winter helps eliminate cabin fever and really makes a hot shower and a warm bowl of chili that much better.”

Linda Reilly, assistant manager of Carlisle’s Appalachian Running Company, has special motivation to leave her warm home and head out into the cold for a run.

“With me, it always comes back to the reason why I started running in first place—for the charities I support,” Reilly said. “My father passed away from cancer five years ago, and my son has autism. They’re examples of strength to me—and I just think about people who have it a lot harder than me… and then I head out for my run.”