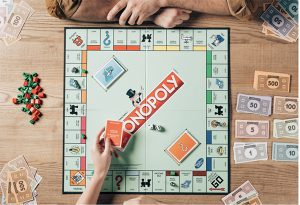 In our pandemic times, many people are looking for safe places to gather.

Sure, you could keep bingeing Netflix or baking with the same people you’ve been staring at for nine months. Or you could button your jeans (or lace up your sweats, like me) and venture to a board game café.

The Harrisburg area has two board game cafés with an open gaming culture on the west and east shores: Game Table Café and UrTurn Café, respectively. Open gaming culture means everyone can join, maintaining the family atmosphere in both cafés.

For a nominal cover charge or membership fee, you can stay all day, play any of the board games from the vast libraries, and eat one-handed while you move your game pieces.

With a library of over 700 board games and floor space for 56 people, Game Table Café has been in business in Hampden Plaza in Mechanicsburg for five years.

“Most restaurants are looking to ‘turn tables,’” said owner Tom Keegan. “We’re an anomaly in that we want people to feel welcome to stay as long as they like.”

Most of Game Table Café’s clientele are young professionals in their mid-20s to late 30s, not necessarily interested in bars or nightclubs, and want to socialize with others in an interactive environment.

“We see date nights, couples’ nights, private parties,” she said. “Some come singly, looking to join a group. Some meet virtually and then meet here in person.”

“Some people who met here are getting married and having their reception here,” Keegan said.

Board-gamers tend to be a supportive bunch, and that spirit is reflected in how these venues are run.

Owners greet each customer, explain how the library and pricing work, and ask questions about your group so that they can make game suggestions. They may even link you up with someone else looking to play.

“People like to try games here before they buy them,” Tyson Bonn said.

Advanced games with a series of expansions can cost over $1,500. Some more exclusive games can only be purchased directly from a vendor.

Not every game represents a competition for the players.

“You can experience other levels of fandom from casual to serious gamers,” he said. “In some games, players play together against the game, building a community with people. For example, European Monopoly is played much less competitively than the American version.”

In this same spirit, Keegan and the Bonns are not competing. In fact, Keegan reached out to offer advice on the Bonns’ business model when he heard of their plans to build a similar business nearby. With a master’s degree in entrepreneurship, Keegan teachers business classes at Shippensburg and has advised several similar businesses in the northeast region.

The local gaming community at UrTurn Café existed long before its grand opening in July, immediately after Dauphin County softened its COVID-19 restrictions on small businesses. Some of their regulars used to frequent Game Table Café, plus random west shore pop-up meet-up spots with roving locations and irregular hours.

Harrisburg resident and UrTurn regular John Tasevoli has been an avid gamer for the past decade.

“The gaming community was here first, and the venues grew from the community,” he said. “I made friendships [at Game Table Café], and I’m hoping to create that same following [at UrTurn Café].”

“I’m impressed [UrTurn] was able to launch and get such a following during a pandemic,” he said. “And the food is great.”

“We took careful time planning to alleviate some of the damage to the games,” Pozza said.

You’ll also find plenty of sanitizer and masks. Reduced occupancy laws due to COVID notwithstanding, there’s obviously an existing community, and “business has been great once [UrTurn] opened, with room to grow,” Walsh said. “It’s the safest thing I can think to do on a Friday night.”

Peter Rubinic regularly brings his family as a learning opportunity, plus he loves the “positive vibe.”

“The kids can socialize and meet other people,” he said. “Playing games helps them learn the rules of life: no cheating, take turns, be friendly.”

The open table concept is in contrast to the more cliquey niches in role-playing gaming leagues, in the vein of Dungeons and Dragons, Magic the Gathering and Adventurer’s League. Niche games usually focus on the fantasy realm and are linked with a specialty gaming or collectibles store.

Keegan acknowledged that certain gaming communities are not known for being welcoming to newcomers.

“It is something of a closed community for the hard-core gamers,” he said. “The ‘nerd culture’ tends to be more exclusive. They sometimes need a little help socializing, and a framework to do it.”

If you want to venture into one of these elite realms but don’t know how, both cafés host welcoming “learn-to-play” events.

In the end, Walsh looks at gaming as not only great for socializing but also for skill-building.