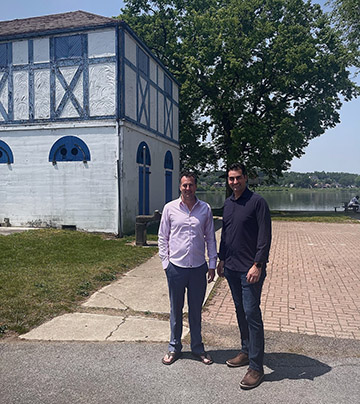 Summer is long over, but the Harrisburg Beach Club hopes people still want to have fun by the water as the outdoor venue is slated to open next week.

Co-owner Bryan Donovan today said that the beach club plans to open for business starting on Thursday at the point on City Island.

“We’re really excited to showcase the space,” he said. “We’ve put a lot of hard work into it, so we’re eager to show everyone what we’ve done.”

The beach club’s bar and tables are located outdoors, on the banks of the Susquehanna River and just outside the city’s historic bathhouse.

The century-old bathhouse, which had been shuttered for decades, is also part of the project. Before it could re-open to the public, the Tudor-style structure required extensive restoration, including renovating the first-floor bathrooms and changing areas.

The owners also made improvements to the outdoor space, including lighting, landscaping and construction of a large bar.

Donovan and co-owner Adam Maust announced their venture in late May, hoping to open in early July. However, various delays pushed the opening into early November.

Donovan said that they’re not too disappointed with the mid-autumn opening. To stave off the cold, they plan to deploy propane heaters and propane fire pits throughout the winter months. They also plan to add heat to the currently unheated first floor of the bathhouse, which will allow them to turn the changing rooms, unused during the winter, into an indoor gathering spot.

“It will be a challenge to battle the cold weather,” he said. “But we believe that getting the inside buttoned up will provide an opportunity for us.” 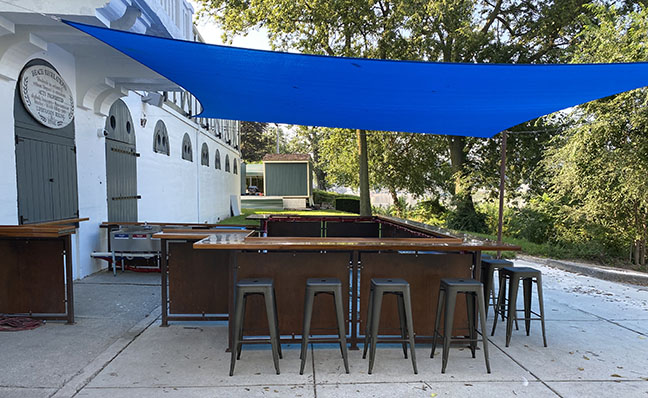 The main bar area of the Harrisburg Beach Club

Over the winter, the owners hope to attract patrons with food trucks, live music and special events. Longer-term, they expect to feature winter sports, such as ice-skating and ice curling.

The beach club is renting the bathhouse from the city. Over the past few months, some city residents have complained to City Council about the deal, objecting that the administration did not issue a request for proposals (RFP) for the space. A renovated changing room inside the bathhouse

City Solicitor Neil Grover has stated that the city had the right to lease the space without an RFP or the explicit assent of council. Donovan said that their attorneys and financial professionals extensively reviewed all agreements to ensure legality.

In order to serve alcoholic beverages, the beach club will employ a satellite liquor license from Hidden Still Spirits, a Hershey-based distillery, which will provide liquors for the venue. The beach club also plans to offer beer and wine from PA-based producers, as well as coffee from Harrisburg-based Good Brotha’s. The bar features a 10-tap system, Donovan said.

He added that he hopes the beach club will benefit City Island, as well, adding a new attraction, especially during the cold-weather months.

“It will be a clean, casual, low-key touristy-type spot,” Donovan said. “Ideally, we would like to see the island become a 365-day-a-year destination for the community and for tourism.”

Once the Harrisburg Beach Club opens next week, regular hours will be Thursday and Friday, 3 p.m. to 8 p.m., and Saturday and Sunday, 11 a.m. to 8 p.m.

The Harrisburg Beach Club is located at the point of City Island, Harrisburg. For more information, visit www.harrisburgbeachclub.com.