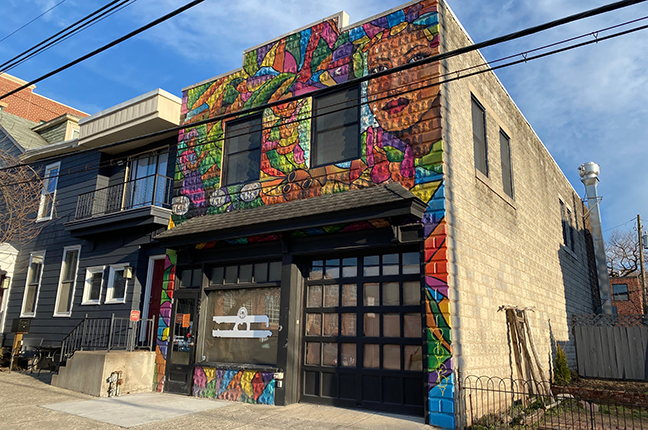 This colorful building is slated to become a shop for products from fltbys.

Harrisburg soon will have a new friend in town.

Brooklyn, N.Y.-based hip hop artist KOTA The Friend plans to make his way to Harrisburg next month to open a streetwear and skate shop in Midtown, as well as to perform a concert.

In early 2020, KOTA announced that he had purchased the Reily Street building that formerly housed the restaurant, Right on Reily, among others over the years. He said that his plans were to open a shop to sell products from fltbys (Flight Boys) Music and Entertainment, his streetwear brand. He had planned to open in April 2020 but the project was delayed.

“Midtown Harrisburg is one of my favorite low-key places to hang out. It’s like this secretly cool spot,” KOTA said in a statement.

In addition to fltbys apparel, the shop will sell skateboards, vinyl albums and local artwork. Last year, he discussed plans for a second-floor recording studio in the building, as well.

Before the shop opens later in the month, KOTA will headline the “Flight Night Global Hip Hop Festival” at H*MAC on Nov. 12. He will be joined by artist Drew Tyrell of Harrisburg, as well as Philadelphia artists Brianna Castro, J Radiant, Derrick Juwan, 10D4YS and Neptune the Poet. “It actually means everything to me that I’m able to open for Kota,” Tyrell said in a statement. “The opportunity is priceless, and I’m beyond grateful he is willing to share his fanbase. It is a blessing, especially here, in Harrisburg, where I come from.”

KOTA said that he hopes the festival in Harrisburg will eventually become a tour, making stops around the county and internationally.

KOTA released his first album, “Anything.” In 2018. He has since released four more albums, including his most recent, “To Kill a Sunrise,” in collaboration with Statik Selektah.