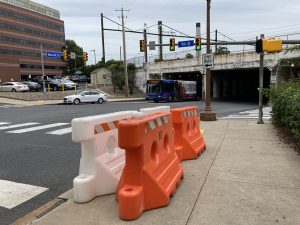 Barricades near the Market Street underpass, which often floods during heavy rain.

The remnants of Hurricane Ida will pass through the Harrisburg area tomorrow, leading the city government to take steps to prepare for potentially heavy rainfall.

The city is currently setting up barricades near flood-prone streets and clearing storm drains, among other efforts to keep residents safe, Mayor Eric Papenfuse said at a press conference on Tuesday.

A flash flood watch from Wednesday morning through Thursday morning has been issued for the Harrisburg area by the National Weather Service, which expects 3 to 5 inches of rain generally across south-central PA, with up to 7 inches possible in spots.

Low-lying areas of the city, like sections of N. Cameron and Maclay streets, may experience flooding, Papenfuse said. In areas like these, the city Public Works Department is setting up barricades that can be used to block off flooded areas, if needed, on Wednesday and Thursday.

According to the National Weather Service, the Susquehanna River water level at Harrisburg is currently around 4.5 feet. The river is predicted to reach 10 feet by Thursday. The flood stage in Harrisburg is 17 feet.

The city does not expect the river to flood, Papenfuse said.

“We are in a good place with regards to levels of the Susquehanna River, and that’s key,” he said. “The river will not flood.”

The Swatara Creek nearby around Hershey is, however, expected to experience moderate flooding by Thursday, according to the National Weather Service.

Papenfuse added that the Harrisburg Fire Bureau is preparing for emergency response situations.

The Dauphin County Department of Public Safety also released a list of recommendations for staying safe during the storm. It includes tips like avoiding driving or walking through standing water, charging cellphones and flashlights, removing essential items from your basement and checking sump pumps and exterior drains.

Papenfuse said that the city’s Kipona festival, scheduled for Sept. 4 to 6 in Riverfront Park and on City Island, will still take place. He does not expect the rainfall to greatly impact the event, although some aspects may be modified if necessary.