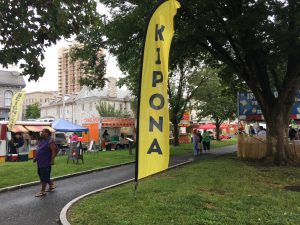 A past Harrisburg Kipona festival

Harrisburg’s festivals have kicked into gear this summer, bringing back a tradition that was missed during the pandemic.

“Kipona is a longstanding tradition within the community,” said Megan Roby, the city’s director of special events.

Last summer, the festival was altered to make it more COVID-friendly, limiting the in-person festivities to one day and moving many events to a virtual format. This year, many of the familiar Kipona experiences will return.

The annual Dick Reese Kipona Canoe and Kayak Races will take place at the northern tip of City Island on Sept. 6 at 10 a.m. Although racers typically face off in a sprint, this year the modified competitions will feature an 8-mile canoe and kayak race on the Susquehanna.

Celebrating Indian and Native American cultures is also a major focus of Kipona. These will be spotlighted through various performances and events, including a “Ratha-yatra,” or the Festival of Chariots, and a Native American pow-wow.

Festival attendees can also shop at an artist market with over 40 vendors selling handcrafted items.

A variety of food trucks will be onsite as well, serving funnel cakes, burgers, cheesesteaks and other favorites. A biergarten along the riverfront will feature selections from Zeroday Brewing Co.

Other activities include a Duck Derby, where people can purchase rubber ducks to float down the Susquehanna to benefit the American Cancer Society’s Making Strides Against Breast Cancer of Harrisburg. Also on the river, American Tightwire performers will take a precarious walk across the Susquehanna from the Walnut Street Bridge to the riverbank.

Over 30 local bands will perform throughout the weekend, and a wine garden will feature acoustic performances.

Children are invited to enjoy free kids’ activities and carnival games at the festival, as well.

On Sept. 5, fireworks will shoot off at about 8:15 p.m. and can be viewed from Riverfront Park and City Island.

The city plans to release a complete schedule of events for Kipona in mid-August.

Street parking is free on Sunday and Monday. The code LUVHBG can be used to receive four hours of free street parking on Saturday. Parking at the Market Square Garage is $10 from 9 a.m. to 10 p.m. on Saturday and Sunday and from 9 a.m. to 7 p.m. on Monday courtesy of Park Harrisburg. Recycle Bicycle will also provide free bike parking at the event.

Other recent city festivals included Artsfest on City Island, which showcased a range of artist vendors, and Harrisburg’s 4th of July Food Trucks and Fireworks festival. Both, in person for the first time in a year, were very well attended, Roby said.

“People seem to be ready to get out and enjoy festivals this summer,” she said.

For more information about Harrisburg’s Kipona festival, visit their website.