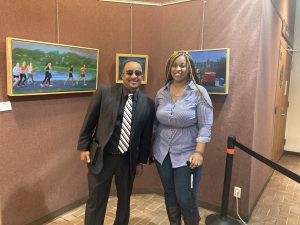 At a press conference on Monday, he introduced residents Autumn Cooper and Anthony Burnett as potential board members.

The committee was approved by City Council in November 2020, after residents submitted comments at numerous meetings and town halls. In the end, all council members, except for council President Wanda Williams, voted in favor of the board.

Members of the board will “act as both a voice for the community, as a means of oversight for the police department, but also as a means of fostering dialogue,” Papenfuse said.

The board is designed to have nine members in total.  It will begin with seven members, two appointed by the mayor and five by city council. Each of those appointees is required to be from a different policing district in the city. That group will then vote to add two more board members from the city at large.

Council has not yet made any appointments to the board.

Cooper is from the Uptown neighborhood, and Burnett is from Allison Hill, Papenfuse said. They are both Harrisburg natives.

“I’m honored by the opportunity to not only serve, but to serve as a liaison and advocate, and working to build and foster positive relationships between the Harrisburg Police Bureau and the community,” she said.

Burnett graduated from Harrisburg High School and works with the city’s department of parks and recreation as a coach. He also has experience working with the Police Athletic League (PAL).

City Council will need to approve both of Papenfuse’s appointments.

“I’m hoping these two appointments will inspire council to make theirs,” Papenfuse said. “We need to put this board in place now.”

In response, council member Ausha Green, chair of council’s public safety committee, said that council has been accepting applications and that she didn’t know that Papenfuse would make his appointments today.

“We had no idea that he was appointing anyone until we saw it come down, then he had a press conference,” she said. “So, I found out when you found out. It was an interesting political process.”

This story has been updated to include comments from council member Ausha Green.