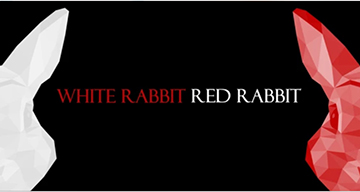 Much like the movie “Fight Club,” the play “White Rabbit Red Rabbit” sets forth a few rules, the most stringent being a gag order on talking about the play.

But I can tell you that the secret is a real zinger—forbidden fruit even sweeter when revealed.

From Iranian playwright Nassim Soleimanpour, “White Rabbit Red Rabbit” is a cross between a psychological thriller, a double-blind social experiment, and slightly disturbing performance art. Presented through allegory and stream of consciousness, the script brings the audience to the point in which the actor, audience and playwright meet.

Although the play isn’t that old (2010), the time of writing isn’t the same world as today. Even in 2010, our western nation is a chasm of differences compared to Iran, where Soleimanpour is denied many freedoms. This play presents a rare opportunity to strip away the dark veil of cultural secrecy, forging a connection over time and place.

Because the play has been translated into 30 languages, it stretches across cultural boundaries to meet audiences where they happen to be. Presented by a different actor with each reading, Open Stage has lined up 11 seasoned actors to read the script cold. At the beginning of each performance, the actor is presented with a sealed manila envelope and a mystery prop. All the instructions and stage directions are contained within the script. Each performance holds the promise of a different interpretation—no hints, no rehearsal, no giving your character backstory or motivation.

With a cold read, how does an actor find the character’s voice? For the actor, I imagine the scenario is something like being born. They burst forth into an unknown situation they did not design, into a family (audience) they did not choose. Then others they meet along the way either witness or become complicit in their harrowing adventures. Our heroes somehow navigate their way through to the end of their time. They make it up as they go.

If I were onstage, I would sputter and stutter like Foghorn Leghorn. Fortunately for all, the Open Stage actors are nothing like me. Each actor is a professional, bringing a solid foundation of experience. Most are local names we know: Chris Gibson, Benny Benamati, Karen Ruch, David Richwine, Sharia Benn, Caitlin Graci, Jennie Adams, Christopher Ellis, J. Clark Nicholson, Georgianna Hicks and Hanniel Sindelar.

Benamati, the second Open Stage actor to cold-read on the hot seat, delivered Soleimanpour’s script with raw emotion. While they admitted to feeling “way more intimidated than I thought I would be,” they quickly settled into the narrator’s compelling voice, showcasing a fair amount of range.

Gibson, the first Open Stage actor to perform the play, confirmed that “the script takes care of finding that voice.” To prepare for the role, Gibson spent his time doing vocal exercises, clearing his headspace of any pre-conceived notions. “Weirdest pre-show experience of my life,” he said.

Want to know the secret? I would write more, but we do not talk about the secret. “White Rabbit Red Rabbit” promises audiences 90 exhilarating minutes down several proverbial rabbit holes, followed by hours of deep contemplation about other topics we do not (but perhaps should) talk about.

“White Rabbit, Red Rabbit” runs Oct. 2 to 24 at Open Stage, 25 N. Court St., Harrisburg. One ticket is valid for all 11 performances of this show. For more information and tickets, visit  www.openstagehbg.com/show/rabbit. Prior to each show, check the website for specific show dates and times, as well as any late-breaking COVID-19 guidelines and protocols.