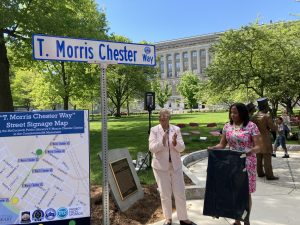 A street in downtown Harrisburg has a new, second name to honor local Black history.

On Wednesday, officials unveiled the designation of part of Walnut Street as T. Morris Chester Way, named after a prominent figure in Harrisburg history.

In October, council approved the street name designation to honor the historic figure. The IIPT Harrisburg Peace Promenade, which installed the Commonwealth Monument on 4th and Walnut streets, is responsible for the initiative.

Thomas Morris Chester was recognized by officials on what would have been his 188th birthday. Chester was a Harrisburg native and the nation’s first Black war correspondent during the 1860s. He helped recruit Black men to the Union Army and gave a voice to Black soldiers fighting for rights and equality.

“He never backed down from a fight and the city will never back down from memorializing him,” Mayor Wanda Williams said.

Chester is also recognized as one of the bronze figures in the Commonwealth Monument.

Walnut Street will keep its name, but, from Commonwealth Avenue to Front Street, it has gained T. Morris Chester Way as a second name.

For more information on the Commonwealth Monument Project, visit their website.