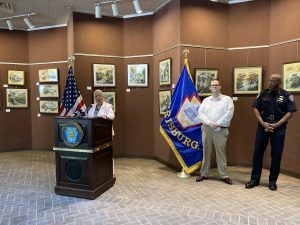 After months of consideration, Harrisburg announced how it plans to use millions of dollars in new federal funds.

“It’s not every day we get $47 million to spend to make the city better,” Williams said. “The pandemic has taken so much from us in so many ways over the last two years. This is why it is important we get this right, right now.”

In total, Williams proposed using $42 million of the pandemic relief funds, and saving the additional $4.6 million for future uses. Her proposal includes four spending buckets: $14.5 million to help low-income residents, $10 million for beautification, parks and recreation, $9.16 million for public safety and $8.8 million to reimburse the city for lost revenue during the pandemic.

Besides the money that would be used to pay back the city for revenue it lost during COVID, the largest allotments would go to creating an affordable housing program and constructing a water park in south Harrisburg. Williams has delegated $8 million for each.

“We feel that every dollar we requested is certainly necessary,” Williams said.

The affordable housing program would primarily seek to direct financial assistance to nonprofits and developers planning to construct and sell homes to low-income residents. According to city officials, organizations or companies would apply to the program and be evaluated based on standards developed by the Department of Building and Housing Development. The city hopes the money will help build a few hundred new affordable homes, according to city Business Administrator Dan Hartman.

Also for low-income residents, the city proposed allotting $5 million to assist homeowners with necessary home repairs and another $1 million to pay for delinquent trash utility bills. Another $500,000 would fund grants for small businesses affected by the pandemic.

“It’s always been my stance that the people of Harrisburg deserve safe, affordable housing, and this proposal would help that,” said Dennise Hill, Department of Building and Housing Development director.

The proposal to create a water park to replace the current Hall Manor pool would constitute another large chunk of funding. Williams said that the park would include a spray area, lazy river, slides, ADA-zero entry points, concessions and community spaces for families. Additional funding would go towards installing ADA-accessible playground equipment in city parks and for tree removal services.

With the funding for public safety, Williams wants to use $5.5 million to upgrade the public safety building’s HVAC system. She also proposed giving $5,000 bonuses, totaling $1.26 million, to police officers and firefighters, using $900,000 to upgrade radio systems for the fire bureau and spending $1.5 million to demolish dilapidated buildings.

“I’m doing this because they deserve it, and they deserve it right now,” Williams said of the bonuses. “They’ve solved nine out of 10 homicides in the city, and also, crime is considerably down over the last several weeks. I want to show my appreciation.”

The city plans to use the $4.6 million left out of the proposal to possibly cover administrative costs and to act as a buffer in case costs for other projects increase. It may also be used for additional projects, such as repaving city streets, Williams said.

The mayor’s proposal comes after the city held a series of public meetings in February to gather input from residents on how they believe the money should be spent.

“Their input was integral, and this administration listened,” Williams said.

The proposal will now go to Harrisburg City Council for consideration. Hartman said that the mayor and other officials will formally present the plan to council on June 7.

According to council President Danielle Bowers, council plans to hold additional public hearings on the proposed use of the ARPA funding before voting on a final plan.

Hartman thinks the final plan could be completed during the summer. However, it may take residents much longer to see many of the items actually take shape. Under ARPA guidelines, the city must allocate the money by 2024 and spend the money by 2026.

“The plan we are discussing today may not be the final plan and that’s OK,” Williams said. “At the end of the day our goal remains the same—to do what’s best for the people of this city.”