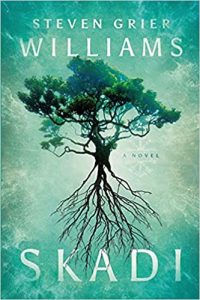 In his debut novel, a local author uses the adventure and whimsy of a fantasy world to communicate real-life lessons.

Steven Williams will begin his book tour in Harrisburg on Thursday for “Skadi,” a book inspired by his passion for advocacy for the vulnerable.

The novel, rooted in Norse mythology, follows Skadi, a skilled warrior who sets out to save a village from torment and death. On her quest, Skadi learns of the lengths she must go to care for others, while also mending her relationship with her son.

Williams, a Harrisburg school board director and associate director for the Pennsylvania Statewide Afterschool/Youth Development Network, said that both of his positions inspired his storyline.

“Both of these roles are advocacy focused,” he said. “That was the lens through which I wrote this book.”

Williams specifically cited his experience as a school board candidate during the 2019 campaign. He was inspired by the grassroots efforts of his small group of candidates to replace several board members and reform how the district operated, he said.

“I want people to take away that being an agent of change means stepping outside of your comfort zone,” he said.

In “Skadi,” the protagonist has to face the challenge of persevering with her mission to help the vulnerable, even when her own passion diminishes, Williams said. That’s a lesson that he hopes readers can apply to current issues.

“If you want real change to happen, you have to be persistent and find a calling beyond yourself,” he said.

In “Skadi,” readers also see a mother-son relationship played out that Williams said was inspired by his own sometimes rocky relationship with his mom growing up. In the book, Skadi and her son learn to appreciate each other’s points of view, something Williams and his mom have learned to do over the years, he said.

Even with all the underlying themes in the book, Williams said he never wanted to write a “preachy” book. He wanted to write something that people would be entertained and mystified by, he said.

Williams was inspired to write a fantasy book based on Norse mythology after getting married and spending time in Iceland, which is where the mythology originates, he said.

“The folklore in Iceland is pretty interesting,” he said. “I want people to get a feel of this mythology.”

Williams begins his book tour at Elementary Coffee Co. in Harrisburg on Thursday at 6 p.m., before traveling to venues around the area. Other Harrisburg stops include Good Brotha’s Book Café, The Vegetable Hunter and The Fix Café, among others.

Williams already has his next two books in the series written, he said. But for now, he’s still in awe that he’s published his first.

“It’s surreal,” he said. “Sometimes, I still have to remind myself that I did this.”

For more information on “Skadi” and the book tour, visit Steven Williams’ website.