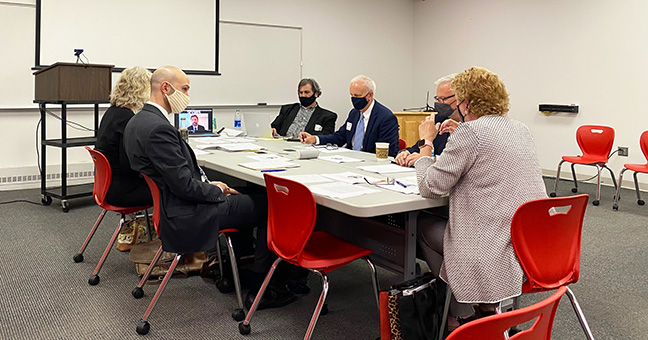 The Intergovernmental Cooperation Authority for Harrisburg at Wednesday’s meeting

The city administration took its case for a proposed debt refinancing to Harrisburg’s state-appointed financial oversight body on Wednesday, stating that time was running short to finalize an agreement.

In a lengthy presentation, Connelly outlined various fiscal scenarios, three of which included a refinancing and three that did not include a refinancing. He emphatically stated that refinancing the city’s debt and paying it back over time made the most sense, especially when compared to paying off the bonds with cash on hand.

“Doing the Ambac deal results in less cost than foregoing the deal on virtually any scenario,” he told ICA members.

In early June, the administration introduced legislation that would allow Harrisburg to settle debt associated with the 2005 renovation of the city-owned minor league baseball stadium on City Island, as well as refinance debt incurred when the city defaulted on general obligation bonds in 2012, in the midst of the city’s financial crisis.

According to this restructuring deal, the city would retire the remaining stadium debt of about $5 million. Ambac then would offer the city an immediate discount on its remaining debt load, reducing it by up to $3.3 million, an amount dependent upon how much money the city pre-pays.

Under the proposed deal, remaining debt would be retired over 10 years.

“All that evaporates if we don’t do the deal by Dec. 31,” Papenfuse, who was not at the ICA meeting, said separately. “We still have to pay off all the debt, but we don’t get any of the benefit.”

However, several City Council members have balked at this agreement with Ambac, and council, so far, has not held a hearing on it. Instead, council leaders, including President Wanda Williams, have said that they prefer to use the city’s substantial savings to pay off the debt in full.

On Wednesday, however, Connelly told the ICA that the city does not have sufficient money in the bank to pay off the debt.

Citing upcoming bond payments, capital expenditures and other expenses, he said that a debt repayment from available cash would deplete the city’s coffers and, in fact, would plunge the city into deficit, making it unable to pay its bills.

Notably, Harrisburg and the ICA have already provided for a debt refinancing as part of its five-year financial plan for the city.

“We think the plan going forward is basically the approach that it is outlined in the five-year plan,” Connelly said.

At the meeting, several ICA members urged the administration to cooperate with other decision-makers, such as City Council, in reaching an agreement.

“I would love to leave you with a politely worded urge to have a sense of urgency in engaging with all interested parties to make sure that a plan that everyone can sign off on is acceptable so it can be executed,” said ICA vice-chair Ralph Vartan.