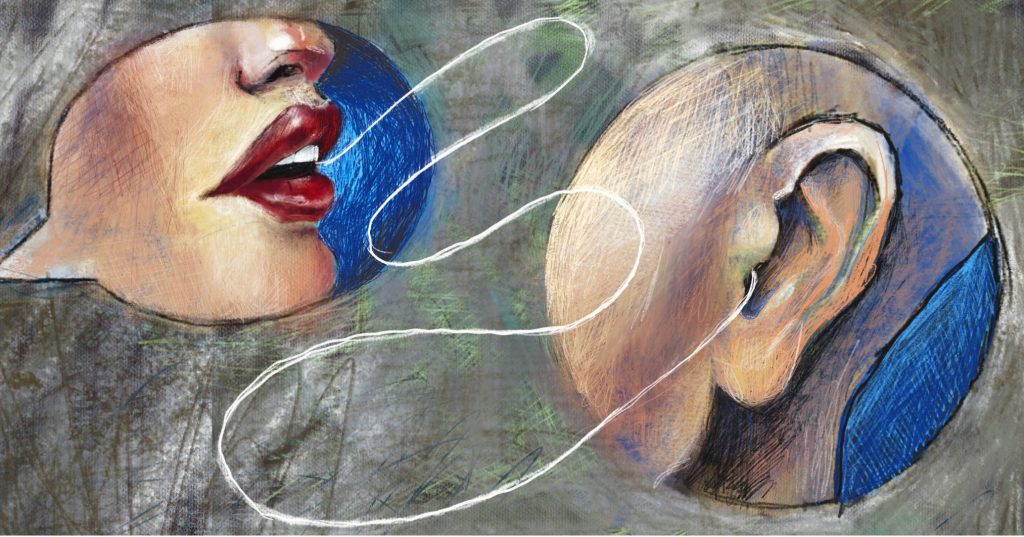 Early 20th century feminist author Miles Franklin once wrote, “Someone to tell it to is one of the fundamental needs of human beings.”

As their Harrisburg-based nonprofit, Someone To Tell It To, rounds out its first decade, Gingerich and Kaden are taking vulnerability and connection mainstream. Why?

“Because we’ve experienced it ourselves, the need to be heard,” Kaden said.

At its core, Someone To Tell It To is a listening service for businesses, teams, families and individuals. Kaden and Gingerich built a model to help people process feelings and reduce loneliness.

The organization doesn’t fit the traditional mold of a therapeutic service. Gingerich and Kaden are the co-CEOs, otherwise known as chief encouragement officers. The team isn’t made up of licensed counselors or therapists, but certified listeners—handpicked to be part of a team built largely with intuitive feelers, according to the Myers-Briggs type indicator. Someone To Tell It To calls these listeners “story seekers,” and the people who they’re listening to “story tellers.”

“We realized there was an epidemic, a growing epidemic, of loneliness not just here in central Pennsylvania, but really all around the world,” Gingerich said.

Someone To Tell It To has helped people process their stories in about 25 countries globally (through interpreters as needed). They never turn anyone away based on an inability to pay.

Two story seekers lead each session, helping to build empathy and respect regardless of the person’s story.

“When it comes to listening, you have to believe the person in front of you, the person you’re listening to, is worthy of being hard,” Gingerich said.

Gingerich and Kaden recently published their third book, “Listening 2by2: A Paradigm Shift for Leaders.” It focuses on how to break down barriers, evoke curiosity, ask questions, and negotiate a path forward.

An average of more than 3.95 million workers quit their jobs each month in 2021, according to the Society for Human Resource Management. Gingerich and Kaden said that this is symptomatic of a larger listening epidemic. The Someone To Tell It To founders’ book combats the shift by breaking down toxic workplace behavior and building up an environment where healthy listening is status quo.

In the book’s forward, renowned author and management training leader Ken Blanchard writes, “Great things can happen when you are bold enough to speak your truth and to listen to others speak theirs. When you listen with intention, conversations flourish and take on a life of their own.”

Recently, Kaden and Gingerich stopped by a local health organization to meet with a team of about 20 nurses and doctors. One of the team members endured a traumatic car crash that left their spouse deceased. The team was rocked, and Someone To Tell It To helped them process what they were experiencing together.

“It was one of the most meaningful encounters that we’ve probably had with anyone, any group or individual, because it was so powerful and so intense,” Gingerich said.

Because of their years of experience, they were able to come last minute and step right into a difficult situation.

Moving forward, Someone To Tell It To plans to continue their eponymous podcast series, featuring guests like Pennsylvania state Rep. Patty Kim. They also plan to continue their work with individuals, hopefully expanding into education settings to help the community build a foundation of listening skills from an early age. All the while, the organization wants to delve deeper into working with professional teams and groups.

Someone To Tell It To will host an evening with best-selling author and leadership expert Jon Gordon at the Scottish Rite Cathedral in Harrisburg on Apr. 12 at 7 p.m. For more information, visit www.someonetotellitto.org.