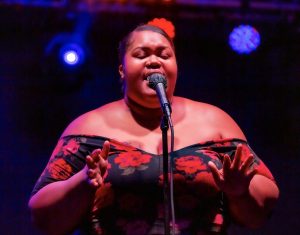 There’s this moment in the new movie “Respect,” about soul queen Aretha Franklin, as she sits around the piano with her sisters.

In the film, Franklin starts singing, and her sisters come in with the background (“just a little bit”), and, all of the sudden, you know exactly which famous song is coming to life in front of you.

I felt all the magic of that moment when members of the Singer’s Lounge began rehearsing the backup vocals for that same song, “Respect,” in Airis Smallwood’s living room on a Monday night. They weren’t even singing the lead for the song, but the soft, soulful background notes were enough for me to realize there were some big voices in the room.

But that’s something that a lot of people have already discovered, because the Singer’s Lounge has been drawing crowds and making fans since 2016, when Smallwood decided it was about time Harrisburg had an R&B music scene.

“I felt like there was nothing for singers to do,” Smallwood said. “If you weren’t singing in church or karaoke, there was no in between, no real platform to get on stage.”

At the time, Smallwood mainly sang in church, accompanying up-and-coming gospel artists. She started pulling together a group including other local singers she knew. Soon, the Singer’s Lounge—a collective of local R&B, gospel and soul artists—formed and performed their first show to a packed house at River City Blues Club on Cameron Street.

The eight core members of the Singer’s Lounge primarily sing backup for their shows, typically held once a month on Sunday nights at H*MAC in Harrisburg. For the lead voice, they bring in local singers. The group helps each artist choose a song, rehearse with the band, and they even give lessons on stage presence.

“I like that it gives artists a platform to build an audience,” said Phebe West, known to Singer’s Lounge members as the “mom” of the group. “So, for somebody who lives on such-and-such street who nobody knows, because they’re performing at Singer’s Lounge, now there is an audience that gets to know them.”

Smallwood attended college outside of Philadelphia and would often travel into the city for its music scene.

At the time, the Black Lily movement was popular in that city. It was a brand that promoted mainly female neo-soul singers from underrepresented and minority groups. They performed at the entertainment venue, The Five Spot, weekly. Smallwood remembers watching Marsha Ambrosius, who would later become one half of the R&B duo Floetry, perform. She loved the idea of seeing rising artists on stage.

“That’s something major cities had that we didn’t,” she said.

Smallwood designed the Singer’s Lounge off of her inspiration from the Black Lily. And if she learned one thing from those nights spent watching performers in Philly, it was that the crowd went crazy for cover songs.

Each Singer’s Lounge event is themed, and it’s not some loosely tied concept, Smallwood said—they go all out. Performers choose songs that fit with the theme. There’s been “Black Broadway,” “New Jack Swing,” “Mary J. Blige,” “That 90s Show” and, of course, their anniversary shows each year, among others. For those, the group dresses to the nines, with custom-made dresses and suits.

All of their concerts are unique, with audience members never knowing exactly what they’re going to get. Smallwood said that she never publicizes the lineups for shows because she doesn’t want people only coming for certain names.

“When you come, you get what you get, but you’re never disappointed,” she said.

Smallwood knows everyone who sings in Harrisburg, she said, so each show is packed with talent.

As they rehearsed that Monday night at Smallwood’s, they practiced together, making critiques, joking and hitting notes.

Smallwood tells West her voice was “in the rafters” when she hit that high note, and West insists, “I swear that’s my note.”

Chandler tells Smallwood to hit the “who” harder in her backup of “Respect.”

“We aren’t afraid to tell each other when we’re wrong, or ‘hey, change that a little bit,’” Noon said. “We have a tight-knit group.”

While they do seek to constructively criticize each other, their praise and support of each other far outweighs it. At their October show, a few members of the group took the lead on songs, other members standing to the side, cheering and throwing their hands up.

They’ve seen each other grow as artists over the years, some releasing recorded music, others growing their fan base locally. They’ve also watched the indie R&B scene in Harrisburg widen as a result of their shows.

In February 2020, the Singer’s Lounge held its anniversary show, not realizing it would be the last concert for months. When the pandemic hit, they put all events on hold.

It wasn’t until September of that year that they held an outdoor event with social distance circles marked on the grass for audience members in Reservoir Park in Harrisburg.

But now they’re getting back to normal, recently holding shows this past summer and fall.

When you attend a Singer’s Lounge event, it’s not just a concert, group members explained.  There are hosts for the night, usually Jamar “Shooby” Barton and Gina Johnson, small business vendors and spaces for photo ops. Business manager Jennifer Smallwood helps coordinate all of this on the night of the event. Sometimes, politicians or community leaders will make appearances to speak, as well.

Many of their shows draw large crowds and pack venues.

“It’s really a who’s who of the African American community,” Smallwood said.

But she made sure to add that the Singer’s Lounge audience is often diverse, including people from all areas of the community.

“The Singer’s Lounge has really formed its own little community,” West said.

Smallwood sees the Singer’s Lounge growing in years to come, possibly touring and expanding to other cities. But for now, she’s invested in the R&B music scene in Harrisburg. The passion for indie music in the city is rising, and Singer’s Lounge has served as that stepping stone, she said.

“People assume that we don’t have the same caliber of talent when it’s just harder to find here,” Smallwood said. “I wanted to inspire a community of singers so we all know each other. Iron sharpens iron.”

The next Singer’s Lounge show is Nov. 21 at H*MAC, 1110 N. 3rd St., Harrisburg. To purchase tickets or for more information, visit their Facebook page.