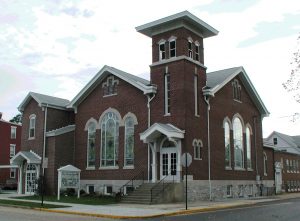 In a time marked by significant division, a new community program aims to unite local churches on the topic of racial justice.

Messiah University, based in Upper Allen Township, launched “Thriving Together: Congregations for Racial Justice,” which will involve 12 Harrisburg-area churches in a two-year cultural education experience.

“We believe there’s an enormous role churches can play to bring healing and justice to our neighbors in the capital area,” said Dr. Drew Hart, program director and assistant professor of theology at Messiah. “There’s so much work to be done.”

Throughout the multi-year program, pastors and other church leaders will participate in seminars, workshops, field trips and projects related to racial understanding and justice.

Participants will learn about the history of race and religion in the capital region, including information on the east and west shores as racial boundaries. They will also receive anti-racism and intercultural training and study the theologies of justice and peacemaking.

Rev. D. Marie Tribble pastors the First Christian Church (Disciples of Christ) in Lemoyne and is a community leader in the Thriving Together program. For years, she has educated local faith communities around the topic of race. Many of these conversations have taken place in her own congregation as members have considered the racial dynamics of their church. Tribble, who is Black, pastors a primarily white congregation.

“Conversations about racial inequality and injustice have been more prevalent lately,” Tribble said. “Churches don’t know how to talk about it. If people don’t have an honest knowledge of the history, they won’t be able to move forward.”

Participants will also have the chance to take part in a five-day Civil Rights Bus Tour through southern states held by the nonprofit, The Common Ground Project.

Towards the end of the course, church leaders will be encouraged to design a program or ministry centered on racial justice for their own congregation.

“Our hope is that local churches could have a real presence in our community and that we wouldn’t be known for silence,” Hart said.

Any church in the Harrisburg-area is encouraged to apply for the program, no matter what denomination they are, Hart said. Their goal is to select a cohort of participants that is as racially, politically and culturally diverse as possible. The deadline to apply is March 12.

According to Hart, the program has already received a lot of interest.

The program was funded through a $1 million grant from the Lilly Endowment, a private philanthropic foundation, as part of their “Thriving Congregations Initiative,” Hart said.

“Too often, many of our churches have rejected Jesus’ prayer that God’s Kingdom would be here on earth,” he said. “There’s so much deeper work that the church can do.”

For more information on Messiah University’s “Thriving Together: Congregations for Racial Justice” program, visit their website.