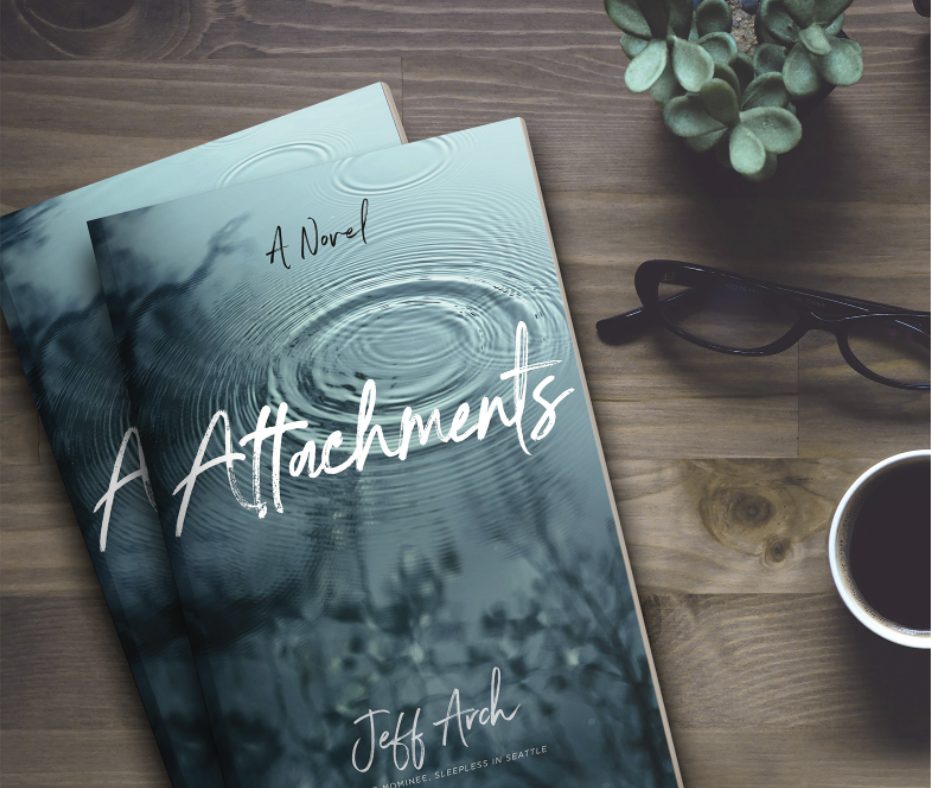 If a writer’s career could serve as an example of the value of persistence in the face of rejection, Harrisburg native Jeff Arch’s would be a superb one.

Nominated for an Academy Award for co-writing the screenplay of the beloved romantic comedy, “Sleepless in Seattle,” Arch has just published his first novel, “Attachments,” a book he began working on some three decades ago.

On a recent FaceTime call, Arch—dressed in a gray T-shirt and baseball cap—looked like he had just strolled in from the beach that’s located across the street from his home in Carpinteria, Calif., a short distance south of Santa Barbara. His appearance and demeanor exude a slight rock music vibe, suggestive of the time he spent as a concert lighting designer after graduating from Emerson College with a degree in film and theater production in 1976.

“Attachments” grew out of a 1988 visit that Arch paid to a favorite teacher at Wyoming Seminary, the Kingston, Pa., boarding school he attended for two years in the early 1970s. The novel tells the story of three students—Sandy (“Pick”) Piccolo, his wife Laura Appleby and their friend, Stewart (“Goody”) Goodman—at a private school that Arch acknowledged bears some resemblance to that one, which he admitted “had a hold on me.”

Eighteen years after they leave the school, they’re summoned back by an urgent request from their former dean before he slips into a coma following a stroke, to face what Arch called a terrible betrayal they’ve escaped dealing with for all that time. Shifting perspectives among these characters and three others, the novel deeply explores the moral implications of long-ago acts and their echoes in the present.

Inspired by an incident Arch recalled from his school days, “Attachments” began as a screenplay, and along with “Sleepless in Seattle,” was written in 1990. In that year, he sold the northern Virginia tae kwon do studio he had owned for three years and committed himself to writing three screenplays in 12 months.

Though the “Sleepless” script eventually gave birth to a movie starring Tom Hanks and Meg Ryan that grossed nearly $228 million worldwide, it wasn’t until 1998 that Arch finally understood that the screenplay he entitled “The Bell Tower,” the predecessor of “Attachments,” wouldn’t get a similarly warm reception by the film industry. That’s when he decided he needed to transform it into a novel.

That novel features memorable characterization and, unlike some literary fiction, a compelling plot. Arch explained that, once he was freed from the rigid constraints of screenplay writing, he “had a blast.” His one job as a novelist, he said, is to “make a complete stranger turn the page. And the only way they’re going to turn the page is if they want to know what happens next.”

Over the next two decades, as he turned out some of the 20 screenplays he’s written, Arch kept returning to “Attachments,” driven to bring this story to an audience. “It just did not let go,” he confessed.

Arch also wasn’t deterred by the sometimes-chilly reception he received for early drafts of the novel. “It’s not failure,” he said, “it’s feedback,” a lesson he absorbed in 1985 when an off-Broadway play he wrote closed after a week. For all his enthusiasm about the writing life, he’s careful not to identify too closely with its end product.

Just before he was about to self-publish “Attachments,” it found a home with SparkPress, and the long journey to publication ended. Early reviews of the novel have been positive, including a starred review from Kirkus Reviews. Some readers have even told Arch the novel has helped them through grief.

Arch credits Oscar-winning cinematographer Conrad Hall with providing his inspiration to pursue a career in screenwriting. In a scene out of a movie, 17 years after their first meeting, he had the opportunity to express his appreciation personally to Hall at a Hollywood luncheon celebrating both of them as Oscar nominees in 1993.

“Attachments” is set in Pennsylvania, and though Arch only returns to Harrisburg for an occasional visit, it’s evident this region hasn’t lost its hold on him. “There’s a part of me that was going to leave, but there was also a part of me that wished I could stay.”

Recalling his childhood in the city’s Uptown neighborhood, he has warm memories of the freedom and simplicity of growing up there in the 1960s and ‘70s, the son of a businessman father he calls a “visionary” and a mother whose love of books and movies sparked his own.

In addition to savoring the Subway Cafe’s distinctive pizzas, Arch also appreciates the beauty of the Susquehanna River, even as he vividly recalled how it ravaged his family’s classic stone home on Green Street just north of Division in 1972.

As his novel enters the world, he’s currently in a “pause” in his writing, the first he can recall in many years. Though he has no commitments from anyone who wants to create a film version of “Attachments,” he hopes his Hollywood connections will help bring it full circle someday. If persistence and resilience will make that happen, it would be a bad idea to bet against him.