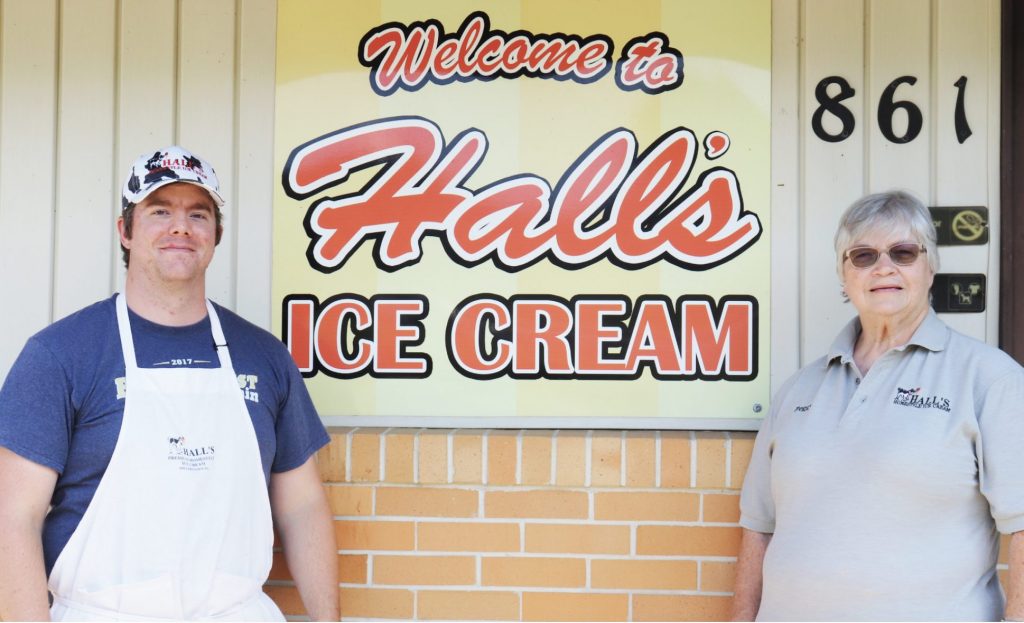 It was 1947 when John Allen Hall made his first batch of cherry vanilla ice cream.

His concoction married the perfect blend of flavors, but his primary goal was to create ice cream worthy of a wedding, to his bride Sally.

Even though that was 75 years ago, ice cream lovers still enjoy his recipe. That first flavor, cherry vanilla, launched what would become—and still is—Hall’s Ice Cream, based in Millerstown in Perry County.

“Two things make it unique. First, it’s creamy, with 14% butterfat, which puts it up there with Ben & Jerry’s or Edy’s Ice Cream. And our ingredients have stayed the same,” said Peggy Raub, 74, current owner of Hall’s Ice Cream—and John Allen and Sally Hall’s daughter.

Raub literally grew up in her father’s ice cream business, her own birth following one year after Hall’s Ice Cream was born.

It was during that timeframe—the ‘50s—when Friskie, a kitschy calf, pranced onto Hall’s logo. And like a step back in time, Friskie’s friendly face—on the ice cream parlor’s signage—still greets today’s visitors.

As Raub likes to say, “Once people have a taste, they tend to come back,” whether they’re from the immediate Perry County community, the greater Harrisburg area, or they’re travelers who discovered Hall’s location just two miles off U.S. Route 322. Cyclists regularly brake for an ice cream break, too.

The pastoral fields framing the ice cream shop were once filled with the Hall family’s own dairy herd. Raub’s great-grandfather was Millerstown’s first milkman back in 1905.

“He was always pioneering,” Raub said. “Our milk business was the first in the area to homogenize, the first to bottle in glass bottles, and when I was young, we even offered home delivery of ice cream.”

But this family-based business and its long lineage of dairy innovators nearly stopped cold.

Hall Gets a Call

Matthew Hall was studying geographical information science (GIS) out in Montana early last year when he got a call. It was his cousin, Peggy Raub, wondering if he’d be interested in changing career paths and giving the family ice cream business a whirl.

So, in 2021, he recalculated his GIS career goals by changing his own geography—moving across the country—to become manager of Hall’s Ice Cream.

“It’s definitely different than what I thought I’d be doing at the age of 28,” said Hall, who has fond childhood memories of visiting family—and the ice cream parlor.

“Matt is the future of the business,” Raub said. “Truthfully, if he didn’t come, we’d no longer be in business.”

One year under his belt, Hall has mastered all the cherished family recipes, in order to churn out between 200 and 300 gallons of ice cream a week.

All Hall’s Ice Cream flavors are still made in small batches, with ingredients added by hand, because “small keeps the quality good,” Raub said.

And small business partnerships are a key ingredient to their 75 years of success—as well as some of Hall’s most popular flavors.

In addition to their flagship ice cream parlor, Hall’s Ice Cream is available at Karns grocery stores, distributed to restaurants from Lititz to Gettysburg, and served at local fairs, festivals and weddings.

“Right now, we’re working with a gentleman from India to make traditional Indian ice cream—saffron pistachio and cashew raisin—getting the flavors right,” Hall said, “He’s talking to stores that carry Indian food products on the West Shore, and Karns has agreed to carry it in their Mechanicsburg store.”

Those community connections and family ties have created sweet success.

“There’s a lot more personality to a business when it’s family-owned,” Hall said. “To most people, it indicates a better connection to the community, and that’s something that sometimes gets lost when you’re a big business or corporation.”

So how tempting is it, being around ice cream 24/7?

“I can easily eat ice cream every day,” Raub said with a smile, naming her personal favorites—coffee, coconut custard, vanilla and raspberry.

“Like all good things, I try to eat it in moderation,” Hall said, but he’s quick to add, “When we’re making—of course, we sample to make sure it’s good.”