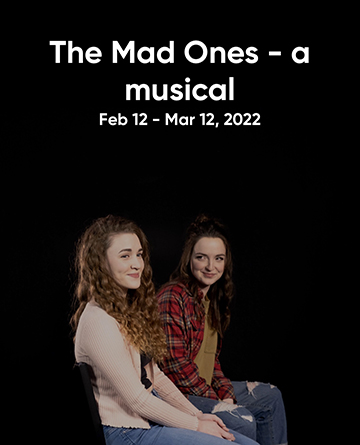 We all have that one friend. Maybe she comes with a warning label, and you have to offer disclaimers before actually introducing her to people.

Your mother probably thinks that same friend is a bad influence on you. Perhaps that same friend reminds your boyfriend that he isn’t good enough for you. But that one friend is wired like no one else you’ve ever known or ever will meet. She says and does odd, shocking things, and she has your heart. She’s one of the mad ones.

Open Stage brings Harrisburg audiences the off-Broadway musical, “The Mad Ones,” by Kait Kerrigan and Bree Lowdermilk. The story, told in mostly flashback sequences through the rearview mirror, is a coming-of-age buddy dramedy about that oh-so sweet spot that is senior year of high school. It’s an exciting time, full of promise. We may reminisce about it as carefree, but it’s a cringe-y era of our existence, if we’re honest. It’s when we ask a freshly hatched adult to make fork-in-the-road decisions that permanently affect the directions of their lives.

That’s the uncertainty that faces our heroine, Sam (Carly Lafferty), who finds her mad one in her best friend, Kelly (Maggie Haynes). Kelly is a supernova, everything Sam wishes she could be herself, and Sam is spinning in Kelly’s infectious orbit. Together, they share a passion for Jack Kerouac’s book, “On the Road,” holding lofty ambitions to rip up their atlases after high school and drive wherever freedom is.

Sam’s ambitious mother Beverly (Rachel Landon) pressures Sam toward an Ivy League school, but Kelly plans for the girls to attend a state school and party in a co-ed dorm. Sam’s boyfriend Adam (Nik Olson) has no higher ambition than to work at his father’s tire store and eat tacos. Sam hasn’t decided exactly what she wants to do after high school, and she struggles with finding the courage to say it out loud. She feels scared, but she must take a risk and move on to her next step.

Then BOOM—a phone call changes everything. It’s like driving through deep mud, yet Sam still must trudge on from here.

“The Mad Ones” soundtrack serves as a poignant vehicle for telling Sam’s story. Songs that gave me the hardest belly laughs: “Sam Failed Her Driver’s Test,” “My Mom is a Statistician,” “Top Ten,” (which outlines a list of Kelly’s most interesting ways to die, unlikely enough to defy a statistician), and “The Proposal,” which contains the chorus “Have sex with me.” (Did I mention the content advisory for children under 14?)

The characters’ sorrows shine through in the actors’ individual singing styles. Like Sam, Lafferty sounds sweet, if not slightly hesitant, unsure, delivering the memorably wistful, “The Girl Who Drove Away.” Haynes belts it out harder, bad-girl Kelly style, with flinty vocals that sound worldlier. She especially showcases her vocal abilities in her solo, “I Didn’t Say Goodbye.” Olson deposits raw emotion into his performance of “Run Away with Me,” even warbling a few times while playing the awkward Adam.

Approaching her character with equal parts intensity and comedy, Rachel Landon brings Sam’s mother Beverly to life as a breakout character, beautifully delivering the moving feminist anthem, “Miles to Go,” and the lamenting ballad, “I Know My Girl.”

Director Stuart Landon said, “The Mad Ones explores time and memory in such thoughtful ways… offering reassurance that each of us should take the wheel of our own life and drive on.”

“The Mad Ones” runs Feb. 12 to March 12 at Open Stage, 25 N. Court St., Harrisburg. For more information and tickets, visit www.openstagehbg.com/show/the-mad-ones. Prior to each show, check the website for specific show dates and times, as well as any late-breaking COVID-19 guidelines and protocols.