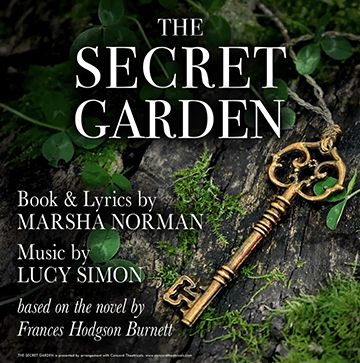 Telling a classic story by author Frances Hodgson Burnett that’s over a century old, Theatre Harrisburg’s “The Secret Garden” brings the musical version alive, even though the majority of the characters are, shall we say, not alive.

Whether you have already seen the award-winning show on Broadway or any of the nine movie or television series adaptations, it’s worth re-visiting the story to see Theatre Harrisburg’s emotive interpretation. With lyrics by Marsha Norman and music by Lucy Simon, the evocative operatic score drives sets the somber mood perfectly for all that is eerie about post-Victorian England.

Set in 1906, we meet Mary Lennox (Charlotte Caples) on the worst day of her young life. Upon awakening from her overindulged life in India, she learns that everyone in her house died from cholera. She is then whisked 6,000 miles away to live with her widowed, reclusive Uncle Archibald Craven (Andrew Vinton) in gothic Misselthwaite Manor.

Because the amount of grief in the home weighs as heavy as the fog on the nearby moors, the house and its inhabitants are haunted by spirits, or “The Dreamers” (Tony Barber, Rebecca Cole, Andrea Crawford, Francis Dy, TJ Fausnight, Wendy J. Faust, Jason Genise-Gdula, Aubrey Krepps, Darren Riddle). With only servants for company, Mary does not have her uncle’s affections, and she is forbidden from entering the garden. This makes it the number-one place for her to break into. The number-two place is a hidden room where she discovers a secret resident.

The grim setting of Misselthwaite Manor becomes a character in its own right, establishing its gravity and mystery with its flickering amber lighting and shadowy, monochromatic colors. The occasional lightning bolts and howling winds further guard the house against young Mary bonding with it or feeling nurtured by it. The spring garden, also tinged with sadness, stands locked and overgrown. The setting juxtaposes well against the slightly brighter melancholic memories that occasionally surface, like a waltz in the garden with a lost love.

Music Director Mitchell Sensenig brings out the best in the talented cast, who seem to effortlessly find their own voices in each other’s harmonic ranges. The singers perform with brilliant passion, all adding to the haunting melodies they create. With rich songs resonating from the depths of sorrow, each vocalist hits echoing notes of loneliness that prickle on the skin.

My favorite duet duos: powerhouse tenors Andrew Vinton and Sean Meara and penetrating mezzo-sopranos Beth Darowish and Aubrey Krepps. And when both duos join forces for “Quartet,” their voices seamlessly reverberate together for an aria so beautiful that musical notes are left hanging in the air along with the fog.

“The Secret Garden” is Director Winnona Piazza’s first production with Theatre Harrisburg. With this musical, she promises audiences a tale that “eventually breaks through to the light and true magic.” It feels symbolic of the world’s long-awaited re-awakening after a different sort of plague. It’s a message addressing “pain and loss, and displays how one can find grace and hope in the future.”