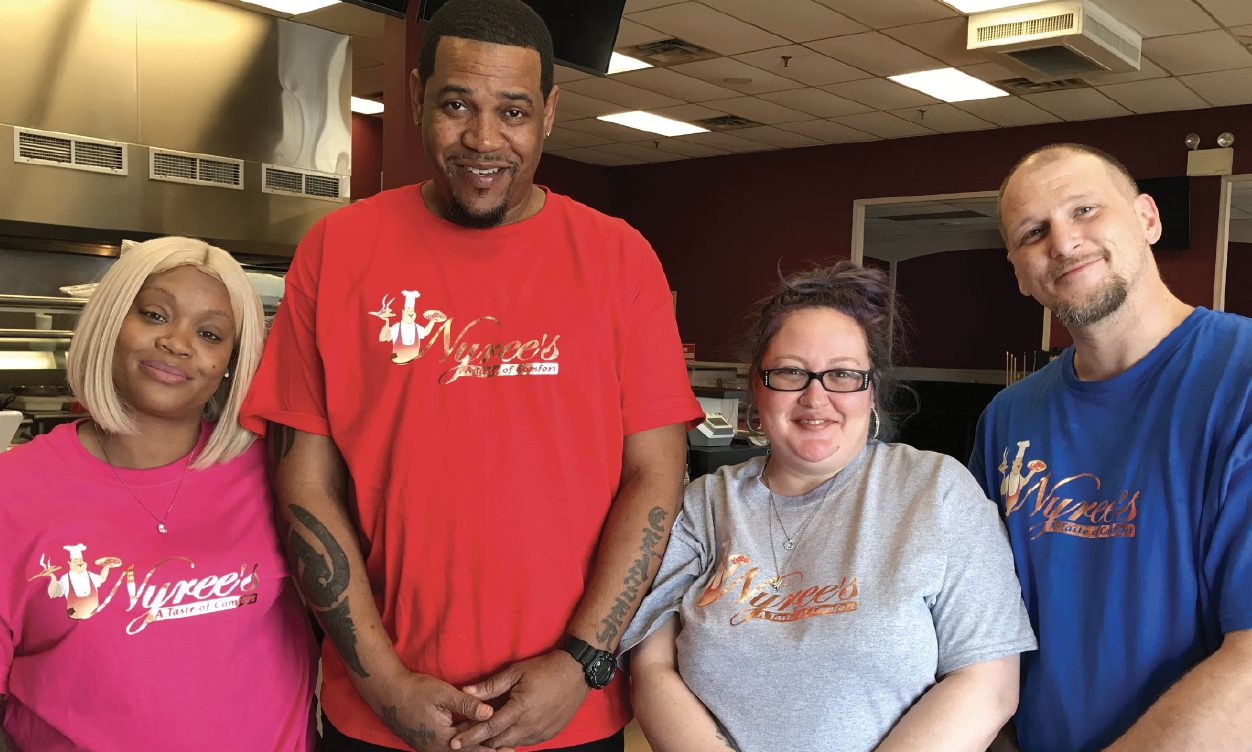 Joe Hobbs, center, with the staff of Nyree’s

Joe Hobbs opened a soul food restaurant on Sept. 11. During COVID. On the West Shore.

When asked if he felt like he was taking a gamble, the good-humored restaurateur let out a chuckle, but otherwise seemed unfazed. “I think so,” is all he said.

Hobbs operates the eatery, which is named after his daughter, Nyree, in the former Cru Pizza & Deli at the Cedar Cliff Plaza and comes by his cooking chops honestly. Not only did he grow up in Philly, which is arguably one of the best foodie areas in the state, but he also came from a big family, led by a Southern mom.

“She showed us how to make great food,” said Hobbs.

His wife Toni assists him in the kitchen.

“She does all the sides, and I do all the meats,” he said.

This isn’t his first foray into the restaurant business. Some may remember Nyree’s at the corner of Market and Cameron streets in Harrisburg, which operated from 2013-14.

If you ask him if he’s worried about soul food being popular on the West Shore, he’ll tell you that people of many different backgrounds are embracing him and his food.

“We’re used to this cuisine because we eat it every day,” he said. “There are no soul food restaurants on the West Shore. So, it’s all about bridging that gap.”

He said that, recently, an elderly white couple, an Asian couple and a Black couple all came in to dine, and he witnessed them jovially interacting with each other.

“I watched them talk about the food and the music,” he said. “If that was in the inner city, it may not have happened. That’s why we’re out here.”

When customers enter the roomy restaurant, they first encounter three big screens with the menu flanking a video, which is designed to make anyone standing in line salivate. The loop shows the staff peeling potatoes for fresh fries, mixing the creamy mac and cheese, and preparing the collards.

The manageable, meat-centric menu includes baked turkey wings, barbecue chicken and pork, both pulled and fried, as well as oxtail, the culinary term for the tail of a cow, which some argue is more flavorful and tender than a short rib.

Those with a sweet tooth can end their meal with old-school desserts like peach cobbler, pineapple upside down cake, strawberry shortcake and the perennial favorite, sweet potato pie.

Customer Vance Hawkins took his mom’s recommendation to give the restaurant a try, and now the Harrisburg resident is hooked. He visits, he said, two to three times a week.

“The food is good—hot and fresh,” said Hawkins, whose favorite is the shrimp and chicken wing platter, although he also recommends the barbecue turkey wings. “They are fall-off-the-bone delicious.”

Hobbs said that helpings are huge and the turkey wings, in particular, fly out the door. He also encourages those who are unfamiliar with oxtail to give it a try.

“They may end up loving it,” he said. “The oxtail is one of those dishes that bridge cultures.”

The roomy restaurant features only about seven tables for the time being. When COVID regulations are lifted, Hobbs plans to add more seats and hopes that customers will come in and get to know each other and maybe even engage in a friendly game of pool.

When the weather warms, he has plans for outdoor seating and a barbecue pit.

You can tell that the passionate restaurateur can’t wait to open up his place to full capacity in the future.

“You can feel the energy right now, and, if I could do this for free, I would,” Hobbs said. “I love to see people’s faces when they are enjoying my food and, judging by our reviews online, they are loving it.”