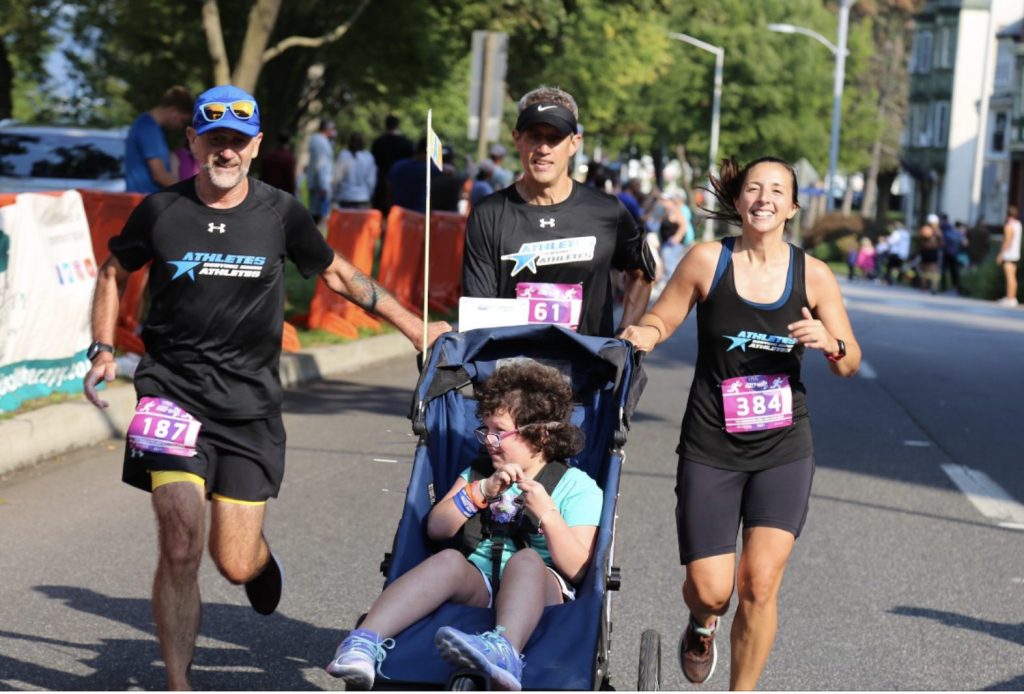 All photos, Athletes Serving Athletes at the 2021 Harrisburg Half Marathon.

In 2014 at a Baltimore 10K race, runner Teresa Meskey witnessed “two dudes in kilts” pushing a child in a wheelchair. They wore T-shirts emblazoned with “Wingman” along the back.

Curious, she investigated and discovered Athletes Serving Athletes (ASA), an organization dedicated to giving people with limited mobility the joy of running.

“We’re hoping that we can give them the same race experiences and the joy of being part of a race,” said Meskey, now the community coordinator for ASA in Dauphin County. “Crossing the finish line is something that should be able to be experienced by everyone—regardless of physical abilities or limitations.”

In 2007, ASA grew out of admiration for Rick and Dick Hoyt, the father-son racing team. Dick Hoyt raced with his son, unable to ambulate himself due to spastic quadriplegia and cerebral palsy.

Today, the organization serves 10 communities in Maryland, Pennsylvania and Delaware.

ASA allows athletes “to meet people outside their social circle, to be outdoors, and to see the trees go by,” said founder and executive director David Slomkowski.

The running experience includes practice, as well as races.

On a December night, in the chilly darkness of City Island, four runners stretched and jumped to keep warm. They were the wingmen for ASA athletes who they would push five miles that night.

One of those athletes was Kyle Weaver. Before the run, Weaver sat in his car with his stuffed friend, Christmas Sloth, under his coat until it was time to load into the running chair. When asked if it was too cold for running, he answered, “no,” with an incredulous grin and inflection that indicated that it’s never too cold for running.

“He loves being with everyone and racing through the crowd,” said Wendy Brown, Weaver’s mother.

Twelve-year-old Leah Borian, from Reading, was just as enthusiastic about the practice. While she can’t verbalize that sentiment, her infectious smile and the twinkle in her eye told all.

Parents also benefit from the program, which allows them to run with their children and connect with other parents and runners. Peter Borian, Leah’s dad, runs with her.

“It’s another way to bond with her,” Borian said.

He said that his two other children participate in sports, and it’s nice to be able to have that with Leah.

“Parents are seeing that their kids don’t have any limits,” Meskey said. “Like these kids are doing things that their parents never thought possible.”

The only requirement for ASA athlete participation is limited mobility. ASA provides the specialized equipment and all racing fees for athletes.

One might think that it would be difficult for a parent to allow their child to “run off” with people. Not so, said Borian

“This is a great organization, the volunteers are passionate and genuine,” he said.

Volunteers say that they receive more from the ASA experience than they give, for several reasons. First, it gives their running another, more important purpose.

“It’s making it not about me,” Meskey said. “It’s about my team, and it’s about helping others.”

“It makes it come alive,” he said.

These devoted runners aren’t immune to the call of the warm, comfy couch. But devotion to the ASA athletes—knowing that the athletes are counting on them—pushes wingmen through the temptation and into their running shoes.

The specialness of running with ASA athletes can be emotional, too.

Any runner, at any skill level, can act as a wingman for ASA. Teams typically consist of three wingmen, with a captain who’s in charge of the athlete’s needs and stays in contact with the parents during the race. Teammates share the pushing, and the team runs only as fast as the slowest runner.

“If you are willing to run with us, then you can do it,” said Meskey.

The experience of participating and finishing is the goal of ASA, not competition.

“We don’t care about the pace that we’re going,” Meskey said. “We just care about getting our team to the finish line safely.”

According to Weaver’s mom, participating in ASA makes him feel good, but he also likes receiving the race bling. He’s raced for 10 years, so he’s accumulated a lot of it. Recently, he was unable to participate in a race because he was hospitalized, but his main concern was getting out to race and collecting his medal. Weaver likes to give bling, too. He makes beaded, holiday-themed key rings that he distributes at every race.

Talking to a reporter was nice and all, but there was a definite sense that there was other business to be attended to—running!

Borian exuded excitement as she got strapped into her chair. Weaver was ready too, but Christmas Sloth had to come out of the jacket so they had room to buckle Weaver in.

“Ready to fly,” said one of the wingmen.

After a photo op, off they went, wind in their faces, the smell of in-between seasons in the air, and a feeling of freedom for five wonderful miles.