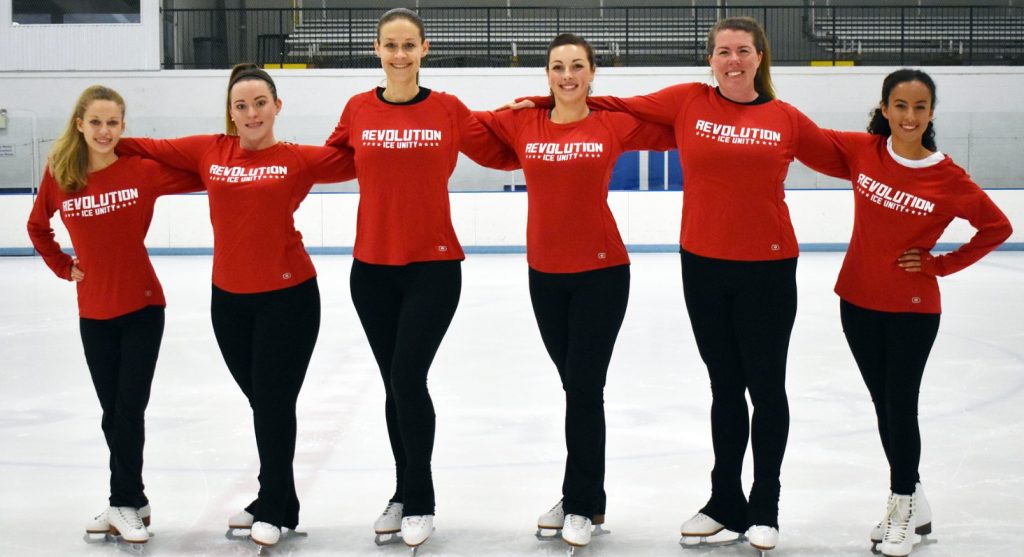 There’s only one thing that gets Kristina Pae out of bed around 5 a.m. on Saturday mornings.

“I’m so not a morning person. I’m not early for anything except for skating,” said Pae, 39, of Etters. “It’s kind of a miracle. I’m literally the first one at the rink because I love it.”

What Pae loves is synchronized ice skating—called “synchro” for short—and her newly formed team. Revolution Ice Unity (RIU) is the only independent synchro adult team in central Pennsylvania. Saturday practices, from September onward, are preparing them for their first season of competition.

During the pandemic, while many of us were just “skating by” and trying to survive daily life, a core group of about 10 skaters—many who had skated together on past teams—connected virtually to form RIU. It happened on Zoom.

“We had all kept in contact and realized how much we missed skating. A lot of us said there was a huge void in our lives,” said Ashley Andyshak Hayes, 37, of Gettysburg. “I actually think it was good timing for us. As terrible as COVID was, it gave us time to sit and think about how to make it happen. We did a lot of planning on Zoom calls.”

First steps included securing RIU’s U.S. Figure Skating membership and a practice location at Lebanon County’s Klick Lewis Arena. Informal summer practices brought a few more skaters into the fold. It was all groundwork, to prepare for their icy footwork.

So what exactly is synchronized skating?

“It used to be called precision skating,” said Andyshak Hayes, who grew up on skates, in her native Indiana County.

She’s been skating synchro for about 10 years.

“The main objective is for the whole team to be in synch,” she said. “It looks easy but is challenging.”

Basic skating skills are a must. Team elements include formations like wheels, circles and blocks. A wheel, Andyshak Hayes explained, looks like a pinwheel, with several lines of three or four skaters—arms linked, footwork in unity—rotating from the pinwheel’s middle.

“We walk the steps off the ice to make sure everyone is on the right foot at the right time,” said Andyshak Hayes.

Even though figure skate blades have flat bottoms, they also have inside and outside edges.

“The more comfortable you get on the ice, the more fluid you get with using your edges properly,” said Pae. “Synchro is about paying attention to your body lines, pointing your toe when you’re gliding, for example.”

Teamwork is key, both on and off the ice.

“Everyone involved has been pouring their heart and soul into it, lending their talents professionally. It’s a team effort, not only on the ice, but behind the scenes,” said Andyshak Hayes, who works for Geisinger Health System’s media relations.

A fellow communicator, Pae is director of integrated marketing for the Milton Hershey School. RIU’s roster also includes two lawyers, a doctor and other varied professionals—many who are also wives and mothers.

Kasey Jordan, 29, of Swatara Township, holds down two part-time administrative assistant positions remotely while pursuing her master’s degree in sports psychology. It’s knowledge that she contributes to the team.

“To get competition-ready, there are nerves being in front of the judges,” Jordan said. “Being an athlete my whole life, I realize it doesn’t matter how much you train your body. If you don’t train your mind, all that training goes out the window. But having that open communication to share those experiences makes our group like a family.”

Jordan, a lifelong Harrisburg-area resident, started skating when she was 6 or 7 at the Twin Ponds rink. After a few years of lessons, she was ready to hang up her skates when she was invited to join a synchro team. She was hooked.

“My senior year, we placed second at nationals—that was my big glory moment,” said Jordan. “Today, our only goal really is to do our program to the best of our ability. At this point in our lives, we’re not going to be Olympians. We’re just trying to have fun and bring home a medal or two.”

Some team members have skated at higher levels. One formerly skated with the Ice Capades; others discovered skating later in life.

“That’s what’s so great—synchro is really for everybody, because you can learn as you grow with the team,” said Andyshak Hayes.

Pae, who grew up in Lower Paxton Township, laced up her first pair of skates when she got into Penn State’s coveted “intro to figure skating” P.E. class, the last semester of her senior year.

“I was always a summer sports participant, but I always dreamed about ice skating,” said Pae. “When you’re on the ice, you’re so free. It’s my happy place, the cold air in my face. It’s a different way of moving that’s addicting.”

Pae describes the team as a “sisterhood.”

“I’m really proud of us taking a seed of an idea and figuring out how to make it work, together,” said Pae. “It was a beacon of hope and bright light, at a time when we were all in our houses.”

Amid a pandemic, nonetheless.

“It still gives us chills when we think about it—this happened because of one Zoom call,” said Jordan. “We giggle about it all the time. When we’re first announced as a team, we’ll know that we’ve really made it.”

For more information about Revolution Ice Unity, visit revolutioniceunity.com. The team welcomes inquiries from women interested in joining the team.