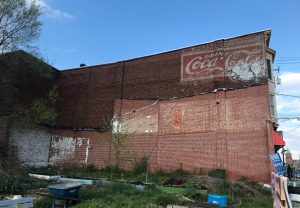 Pizza Boli’s, at the intersection of 13th and Market streets, will be the site of an upcoming mural created by Sprocket Mural Works.

Two large murals are coming to Harrisburg, and community members are encouraged to offer input on them.

As part of the 2021 Harrisburg Mural Festival, Sprocket Mural Works plans to paint large-scale murals in Allison Hill. One will be located at the corner of 13th and Market streets and others will be on the Mulberry Street Bridge—which will be Sprocket’s largest mural project to date.

“We’d love to hear about the public’s hopes and dreams, for what will be two landmark murals being created this summer,” said Megan Caruso, co-founder and president of the nonprofit Sprocket Mural Works. “Community input is vital to guiding the creative vision for both projects.”

Sprocket has released a community survey to hear from people on what they’d like to see as part of the projects. They will also be at the Allison Hill Farmers Market on July 28 and Aug. 4 to speak with community members directly. According to Sprocket, anyone with ties to Harrisburg is welcome to participate in the survey. However, they especially invite participation from Allison Hill residents since both murals will be in their neighborhood.

Also as part of the mural festival, Sprocket is currently working on a mural in Allison Hill at the Recycle Bicycle building on Chestnut Street and recently completed a planter painting project in Allison Hill.