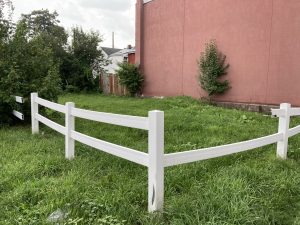 A city-owned lot in Midtown Harrisburg

For Harrisburg residents looking for a little extra green space in the city, you’re in luck.

Harrisburg is reinvigorating its “Adopt-A-Lot” program, which allows residents to make use of a city-owned grassy area.

The program helps the city maintain its many vacant lots, while giving interested residents some additional, if temporary, empty land, according to city officials.

“It’s a win-win,” said Brooke Bobitz, assistant to the city’s business administrator and manager of the Adopt-A-Lot program. “It gives residents and organizations an opportunity to take ownership of the green space in their neighborhoods.”

Through the program, a partnership between the city and the Harrisburg Redevelopment Authority, residents can lease an empty lot for just $1 per year. They may then use it for such things as growing a garden, maintaining an open green space or for a neighborhood gathering space, Bobitz explained. However, no permanent structure may be built on the land, and the city may take it back at any time if it is slated for development.

Harrisburg does maintain its lots, Bobitz said, but with so many in the city, resident participation is helpful.

The program, Bobitz said, started a while back, but largely went under the radar until she started advertising it about a year ago. Since then, there has been more interest from the community.

Kenyotta Thomas has his hands in over 15 gardens in the city, he said. His organization, The Soul Proprietors Inc., and Harrisburg Urban Growers, which he helped found, have worked to bring gardening education and fresh produce to residents through community gardens. Through the Adopt-A-Lot program, several of their gardens have been planted on formerly vacant lots.

Currently, Thomas spearheads the efforts at a garden on 24th and Berryhill streets, leased through Adopt-A-Lot.

“I wanted to give people the opportunity to grow their own food and have a space to do it,” he said. “I believe that people start to take more pride in their community when they see a lot that used to be blighted turned into a garden.”

Bobitz said that, for residents who don’t have much yard space, open green spaces, like these lots, are important.

Any city resident or organization may apply for Adopt-A-Lot.

“I hope that people get interested,” Bobitz said. “It’s a really cool thing that the city does.”

To learn more or to apply for Adopt-A-Lot, visit the city’s website or contact Brooke Bobitz directly at bmbobitz@harrisburgpa.gov.