George Clooney has one. Beyoncé has one. And, now, you can have one, too.

Actually, you can have two — private islands, that is.

An island pair is currently for sale, smack-dab in the middle of the Susquehanna River in Harrisburg.

Last week, Independence Island and Bailey’s Island hit the market for the first time in well over a century.

Owners Robert and John Ensminger listed the islands, located near the Harvey Taylor Bridge, for $150,000 as a set.

“My brother and I are both getting up there in age,” said Robert, 71, when asked about their motivation for selling. “So, we decided to just put them on the market and see what we would get.”

The family traces its roots in central PA to 1733, Robert said. A century later, in 1836, their great-great grandfather established Ensminger Auctioneers in downtown Harrisburg, a business that Robert, who nows lives in Susquehanna Township, still runs today.

The islands also have been in the family for generations—Robert wasn’t sure exactly how long—passed down to the current owners 20 years ago from their parents, Hilda and John T. Ensminger IV, according to the property deed. 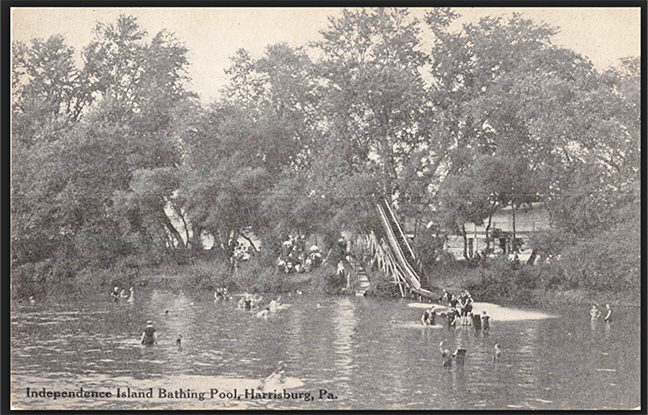 A postcard shows a makeshift slide and bathing area on Independence, with a pavilion in the background.

A Harrisburg Telegraph article from Aug. 21, 1916, shows that this isn’t the first time the islands have been for sale.

The 106-year-old story, headlined, “City’s Chance to Take Over ‘Independence’ Is Slipping,” states that the city wanted to purchase the larger, 5-acre Independence Island for a “municipal bathing resort.” The day before, on Aug. 20, an estimated 4,000 people had “crowded” onto the island on a warm summer day to swim, the article said.

However, there was competition to a city purchase. An unnamed “New York syndicate” was also interested, eyeing the island for a possible private resort, the article stated.

“I can’t say whether the city will get a chance to get the island should the New York people buy,” Charles Ensminger was quoted in the article. “I have other business to look after and when my price is met, I am ready to sell. I think the deal will be closed some time to-day.”

The newspaper then took sides on the issue, advocating for city control:

“It is pointed out that if the city takes over the popular bathing resort, Mr. and Mrs. Harrisburger, with all the little Harrisburgers, who are just about learning to kick and splash in the water, can use the beach free, while if outside capital gets control, the public will have to pay the piper. The consensus of opinion to-day seems to be that it is up to Council to get busy before it is too late.”

In the end, neither the city nor the “New York people” bought the island, and a few years later, Harrisburg established a public beach and bathhouse at the north point on City Island. The islands have remained in the family’s hands to this day.

Other news stories from the late 19th and early 20th centuries mention that Independence Island was used for picnics, races and various sporting contests, including greased-pole climbing. For a long time, a large pavilion for visitors stood on Independence Island. 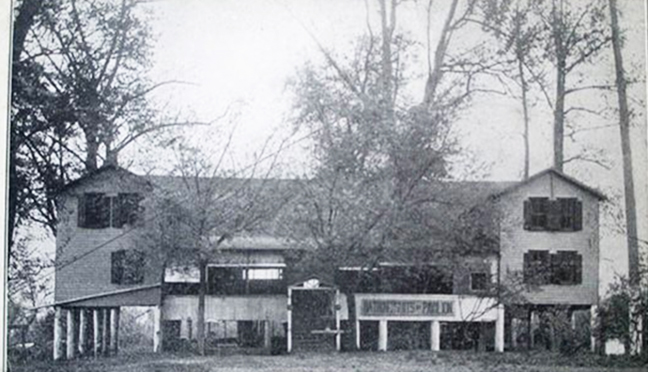 Today, the islands have no permanent structures, and they’re mostly visited by boaters. Over the years, Independence Island has gained the nickname “party island” for the pontoon boats that stop and dock there.

So, what would a buyer do with the islands?

They’re zoned as “open space recreation,” which, according to the city zoning code, severely limits potential use, though certain recreational uses are allowed either by right or with a special exception.

If nothing else, “you’ve got good bragging rights,” Robert said.

He’s hopeful that, unlike his forebears back in 1916, the islands will sell this time around.

“Someone will buy it somewhere along the line,” he said. “Make me an offer I can’t refuse.”