Verizon 5G pole in front of the Susquehanna Art Museum

The Susquehanna Art Museum was not initially happy with the large 5G pole that popped up in front of their building last summer.

But on Wednesday, they showed off the pole, which was transformed into a colorful work of art.

“I wanted this to be a light in the community,” said Stephen Michael Haas, the Harrisburg artist behind the design. “You can’t help but smile when you see it.”

The pole is one of over 100 small cell sites that Verizon has installed in Harrisburg as part of its efforts to provide 5G Ultra Wideband connectivity. According to Verizon, the poles increase network speeds and streaming capabilities.

However, when Verizon started to bring the technology to the city last year, many residents and business owners had concerns about the aesthetics of the poles, especially those fronting historic properties.

Alice Anne Schwab, executive director of Susquehanna Art Museum in Harrisburg, was also unhappy with the new device that was installed directly in front of her museum. However, she has since developed a partnership with Verizon to make the pole the first of its kind in the nation to become a work of art. The museum brought in Haas to complete the work.

“We are so excited about this partnership, but at first we weren’t,” Schwab said. “We are proud to be the place people can look to and say, ‘yes,’ you can work with a corporate company.”

The pole is wrapped in a whimsical rainbow design created by Haas with the intent of turning an eyesore into a cheery sight-to-see, he said. 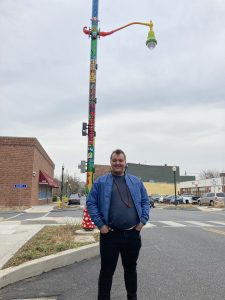 “It’s art for everybody,” Haas said. “That’s important for me. There’s not a barrier for entry. My biggest goal is to inspire people.”

According to Verizon Project Manager Marshall Sbar, the company is having discussions about adding art to other 5G poles in the future.

“There’s so much potential for these,” he said. “It’s not going to be the last. I think there are going to be a lot more of these.”

Verizon officials noted that, so far, there have been 112 5G poles installed in the city with plans to add 33 more throughout this year.