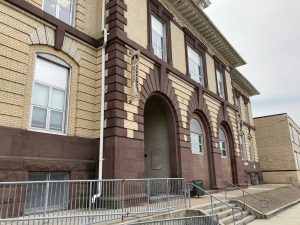 The Harrisburg School District seems to have narrowed in on a candidate in its search for a new superintendent.

The district announced on Monday that long-time Reading High School principal Eric Turman will move forward in the hiring process—a step that would put him closer to assuming the position of superintendent.

“Above all, I believe the interview team was impressed with Mr. Turman’s commitment to children and success and positive track record in helping to bring academic achievement to a school system that faced many challenges,” said Receiver Dr. Janet Samuels, in a statement. “He is clearly passionate, has tremendous connection with his students, and focuses on cultivating relationships. His selection as the finalist was unanimous among our interview team.”

Turman was selected as finalist after a national search that included participating in focus groups and interviews. The process was supported by the Montgomery County Intermediate Unit, an organization that assists local school districts, including Harrisburg.

District officials will virtually visit Reading High School on Tuesday to speak with faculty, staff and students. On Thursday, Turman will virtually speak with Harrisburg stakeholders. According to the district, if the virtual visits go well, Samuels will likely announce her intent to appoint Turman next month.

Turman has been the principal at Reading High School since 2011, where he oversees the 5,200-student body. He began his career as a teacher and has also held administrative roles including director of elementary education.

Turman received the Maxwell Transformational Leadership Award and has been credited with transforming Reading High School as well as the surrounding community through business and community partnerships, according to the Harrisburg school district. Turman also expanded programming to address homelessness, food insecurity, financial literacy, workforce development and college readiness in the district, the district stated.

The district also stated that he helped Reading High School increase its graduation rates from 53% in 2011 to as high as 72% in 2019, to decrease student dropout and suspension rates, and increase its school performance profile data.