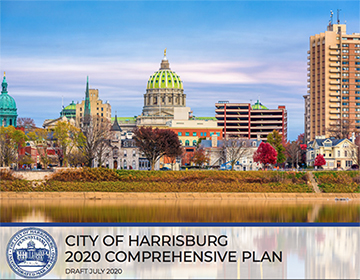 The clock has begun to tick on the final stage of Harrisburg’s proposed comprehensive plan, with residents encouraged to review the plan and make comments.

During a virtual work session on Tuesday night, city planning Director Geoffrey Knight offered an extensive presentation of the plan to City Council, an event that kicked off a 45-day public comment period.

The city, Knight said, has set up an email address specifically to receive public comments on the plan. That address is compplancomments@harrisburgpa.gov.

“I want to thank everyone for all their hard work on this document. We’re eager to get it approved,” said council member Dave Madsen. “But we have to do our due diligence and take a hard look at it and get that feedback from the community.”

The city’s current comprehensive plan dates back to 1974, though it’s supposed to be thoroughly reviewed and rewritten about once every 20 years.

In 2014, the city began the process of creating a new plan, but met numerous delays, including a protracted dispute with the consultant hired to draft the plan. Last month, the city Planning Commission unanimously passed the plan, sending it to council for final approval.

According to Knight, the city already has received numerous public comments and questions on the 246-page document, even though the official public input window just opened. The 45-day comment period expires on Dec. 4, unless council decides to extend it.

After the comment period expires, council would need to hold at least one public hearing before voting on the plan.

City Solicitor Neil Grover said that council has the authority to make changes to the plan before voting, including the possible inclusion of some or all of the public comments.

On Tuesday night, Knight summarized the plan on a chapter-by-chapter basis, which includes such topics as land use, housing, mobility, parks, energy and cultural resources.

“Updating this plan will be important in helping to guide land use decisions,” Knight said. “Hopefully this plan . . . will help guide projects that come through the land development plan process, will help us establish policies going forward and will help us go out for grants in the future.”

Knight stressed that, even after the plan is approved, the city can make updates to it over the years.

“It really should be seen as a living document,” he said.

Council member Westburn Majors inquired about a federal lawsuit filed in June by the Harrisburg-based Office for Planning and Architecture and its majority owner, architect Bret Peters, who the city hired in 2015 to draft the comprehensive plan.

In 2017, Peters and the city had a falling out over payment and the release of several chapters of the draft plan to the city.

On Tuesday, Grover said that he couldn’t comment publicly on specifics of the ongoing litigation, but said that the lawsuit shouldn’t stop the process of completing the comprehensive plan.

“From our view, unless a judge says otherwise, it doesn’t affect what you’re doing,” Grover told council. “It’s a public document paid for with public money, and it’s what’s best for the city.”

Several council members emphasized the importance of fresh public comment, since the comprehensive planning process dates back six years. Majors, for instance, said that many people who live in the city today may not have been in Harrisburg when the original public meetings were held years ago.

“I want to make sure there’s an opportunity for those folks to provide input,” he said. “I look forward to receiving comments from the public and really digging into this plan at another time.”