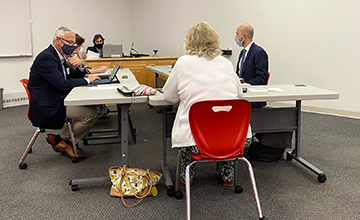 Members of the Intergovernmental Cooperation Authority, at their meeting last week

In a meeting last week, the Intergovernmental Cooperation Authority for Harrisburg (ICA) discussed the city’s “Mid-Year Fiscal Review” for 2021, which stated that the city had $41.7 million in the bank.

“The reports demonstrate good revenue receipts for the first six or seven months of the year, a solid balance in the general fund,” said board vice-chair Ralph Vartan, citing the mid-year report, along with two other financial reports recently received by the ICA.

The mid-year report, which the ICA received on Aug. 16, states that the city has several large expenses that will eat into its large fund balance through the second half of the year. These include an $8 million general obligation bond payment, about $5 million in capital expenditures and $4.6 in pension payments.

Nonetheless, the city should end the year well above its originally targeted $13 million fund balance, according to the ICA.

In its report, the city reported that revenue collections were nearly $3 million more than at the same period last year. Business-related tax receipts were especially strong, according to the report.

“Total revenues are on pace to exceed the budgeted amount for the year, with particularly strong performance from earned income tax and business privilege tax revenues,” the mid-year review states.

In contrast, the city showed weak parking tax revenue, which officials attributed to less commuting into the city, mostly due to the slow return of state workers to their offices.

“Many city employers, including the commonwealth, Harrisburg’s largest employer, are still not requiring regular in-office work, which has a materially negative impact on parking revenues,” according to the mid-year report. “While the city’s budget anticipated a slow recovery from these sources, revenues are even lower than expected.”

First, members cited what they considered to be a low rate of collections within the Neighborhood Services Fund, which covers sanitation services. Vartan stated that the collection rate stood at 88% but should be above 95%.

Secondly, the city saved money not only because of strong tax receipts but because it’s having difficulty hiring for open positions.

“Generally, I agree the numbers look good,” said board member Doug Hill. “I don’t know how durable it will all be because the surplus balance relies in part on a continuing set of staff vacancies.”

“When you see the staff vacancies—saving money is great,” he said. “But unfilled budgeted positions would unduly and deleteriously affect the city’s ability to execute their program requirements.”

“Maybe the local business community and the small entrepreneurs and the established businesses should give themselves a little pat on the back for revenues that justify tax returns more than anybody believed would be [possible],” Vartan said.

For more information about the Intergovernmental Cooperation Authority for Harrisburg, visit their website.