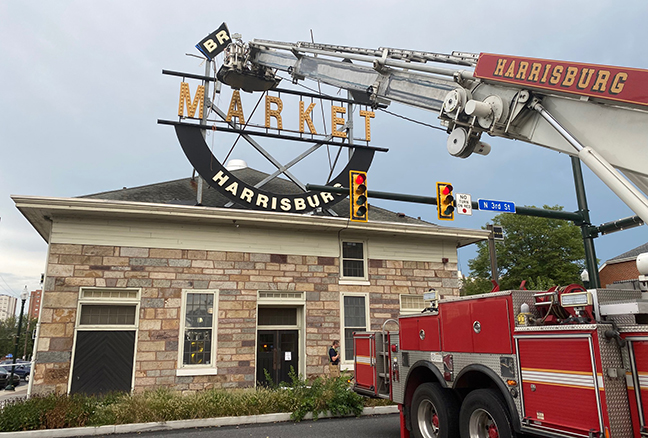 The wind might’ve defeated the Broad Street Market’s iconic sign, but the Harrisburg community wouldn’t let that stand for long.

The market has successfully raised enough funds to move forward with upgrading and replacing its sign attached to the front of the stone market building.

“The sign means a lot to us here [at the market], but I think it means even more to the community,” said Josh Heilman, executive director of the Broad Street Market Alliance.

A December windstorm damaged the sign, ripping off two letters. In May, the nonprofit market called on the community to help raise funds for the repairs.

According to Heilman, a second windstorm in August further damaged the sign, and that was the needed final push in their GoFundMe fundraiser.

In the end, the sign repair project received more than $20,000 from individual donors on GoFundMe and about $23,000 from private and corporate donors.

The nonprofit, Lighten Up Harrisburg, recently made a large donation, sending the market over its goal of $40,000.

According to Dauphin County Prothonotary Matt Krupp, the founder of the organization, they recently donated $10,000 in remaining funds from their 2012 fundraiser to the market sign upgrade, which includes a substantial lighting component.

“We were looking for the right project to be the capstone of Lighten Up Harrisburg,” Krupp said. “When I saw the market was in dire need of redoing the sign, I thought this would be perfect.”

Now that the market has met its goal, officials are working to schedule a time for Harrisburg-based RPM Signs & Lighting to install the new sign, Heilman said.

The old sign, created in 1996, has been taken down and is being refurbished to include the market’s new logo, featuring silhouettes of the two market buildings. It will also include increased lighting around the letters, as well as other replacements and upgrades.

This sign, Heilman assured, will be built with heavy gauge aluminum, making it last for much longer than the previous one, which was constructed with laminated plywood.

He expects the sign to be installed by the end of October at the latest.

Restaurateur Josh Kesler, owner of the Millworks, located across the street from the market, was the largest individual donor to the project, giving around $3,000.

“The market is the lifeblood of the city,” said Kesler, who also sits on the market’s board of directors. “The market needed some help, so I wanted to do what I could.”

However, on average, most people gave about $20, which showed the investment of the community, Heilman said.

“We weren’t walking around asking people for donations; they took it upon themselves,” he said. “It’s really an astonishing thing that the community came together in the way that they did.”