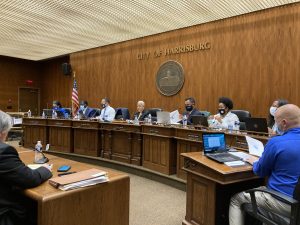 An affordable housing development for seniors planned for Harrisburg can now break ground.

At a legislative session on Tuesday, City Council unanimously approved the land development plan for Bethel Village, a 49-unit apartment building for low-income seniors at N. 6th and Herr streets.

“I think this is a win for the community,” said Blane Stoddart of RB Development, one of the partners in the project. “So many people are going to benefit from the building of this building to provide affordable housing for the residents of Harrisburg.”

While many council members voiced support for the mission of creating affordable housing in the city, some did have hesitations about the safety of the site and limited parking.

Officials of the $15 million Bethel Village plan to have only four off-street parking spaces, having received a special exception from the Zoning Hearing Board in August.

Concerns around the lack of on-site parking have come up numerous times during the course of Bethel Village’s municipal approval process. At packed Zoning Hearing Board meetings, residents said that the four spaces were not enough and would cause a significant inconvenience to the neighborhood with many more residents now looking for parking.

On Tuesday, Council President Wanda Williams expressed similar concerns around a lack of parking for residents.

Bethel officials have said that they believe a majority of their residents, all low-income and elderly, will not own a car.

The developers also have letters of intent with Tabernacle Baptist Church for the future use of 15 surface parking spaces and with the state Department of General Services for use of 10 spots.

Williams also noted that using the church and DGS parking lots will require senior residents to walk uphill and across busy streets, something she saw as a safety hazard.

“I want to make sure everything is right for the senior citizens,” she said.

However, in the end, with reassurance from Stoddart that they would increase their safety measures, Williams voiced her support for the project.

“I’m excited for this because I know the city needs this,” she said.

Stoddart said that they hope to move forward with groundbreaking plans by the end of the year, but that they still have a lot of work to do.