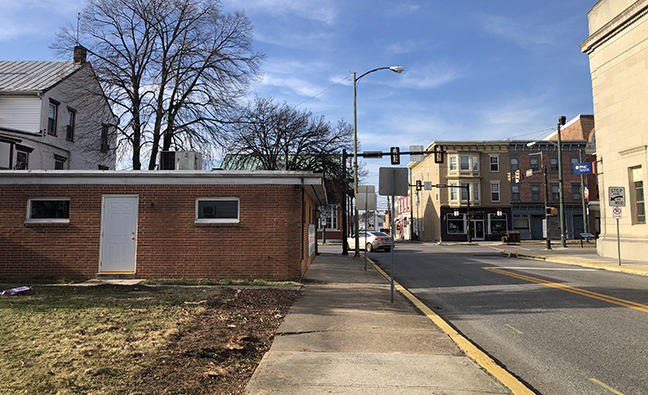 The future site (left) of Center Square Park in Mechanicsburg

Mechanicsburg is on the verge of a renaissance.

A $5.3 million, three-phase revitalization plan is set to begin Saturday, March 26. That’s when demolition will take center stage—on Center Square. A vacant, one-story brick building at 1 W. Main St. will be demolished to make way for a town park—correcting a 200-year-old error in the town’s layout and design and honoring the town founder’s original vision.

“Since the streets were laid out in the 1820s, there’s not been a lot done to give new vitality to Mechanicsburg, but this is a rebirth or reimagining of life as we know it,” said Jayne Drake, executive director of the nonprofit Downtown Mechanicsburg Partnership (DMP). Revitalization efforts, known as “RENAISSANCE Mechanicsburg,” are funded by grants, corporate and individual donations.

History in the Making

Saturday, the public is invited to celebrate and witness history in the making, beginning at 9 a.m. Festivities include the building’s demolition—complete with photo ops with the bulldozer, a time capsule project managed by The Foundation For Enhancing Communities (TFEC), a children’s “Paint a brick” contest, free popcorn, refreshments, and a festival atmosphere. Food vendor sales by Richard Phelan, owner of The Gingerbread Man, will benefit the project, and many downtown businesses will offer discounts in honor of the momentous occasion.

The corner of West Main and South Market streets is “the civic soul of the community,” Drake said. That’s because, over time, numerous comprehensive borough plans dating back to the 1950s have called for revitalization efforts—specifically, a community park at that location.

But the history of that intersection, and visions of a town green, actually go back much further.

“Two hundred years ago, when the original landowner, Henry Stouffer, sold off his farmland to set up the town, 1 W. Main Street was always and forever to be a public park,” Drake said. “But for reasons lost to time, it never was established.”

Instead, the corner lot held a succession of houses, replaced by the Wesley Methodist Episcopal Church—which stood for 100 years before Hurricane Hazel ravaged it in 1954. At that time, even though the borough’s first comprehensive plan in 1960 noted the original vision for a green space on that plot, a one-story brick structure was built. It housed a drug store, an attorney’s office, and most recently, a trucking company’s office. Today, many, including Drake, consider it “an eyesore.”

“When the opportunity arose for the Downtown Mechanicsburg Partnership to purchase it three years ago, we jumped on it,” said Drake, noting the property’s price of $225,000 and adding, “It’s important to understand that no taxpayer money is being used to improve this area.”

The intersection, in the heart of the Cumberland County borough, has become known as the town’s center square. The creation of a green gathering space, Center Square Park, with “Mechanicsburg” signage, would make it official. 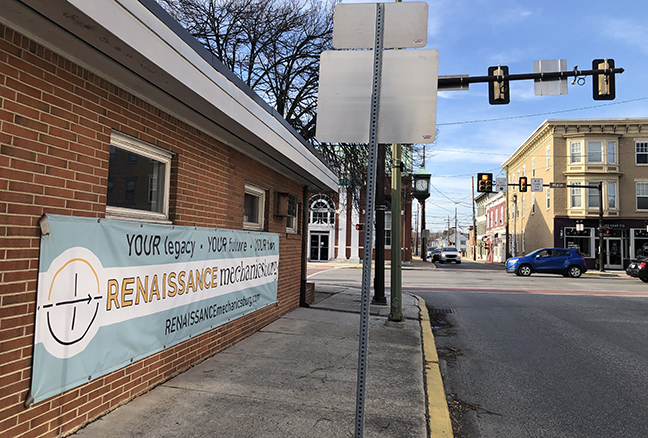 This small brick building will be razed to make way for the new park.

“We can just watch from the window,” said Alicia Miller of Glitz Soap Co., located diagonally across the intersection from the demo site. “That building really doesn’t fit in any downtown—it’s so short and squat and weird, but I think a park gives people a place to gather at a central downtown point, and every downtown needs a central point.”

Among her handmade soap products is “The Renaissance Soap”—with 50% of proceeds going to the DMP.

“I feel like we’re going to benefit from the project, so I think we should give back,” Miller said. “I’m excited it’s coming to fruition. I thought it was just an idea that was going to stay an idea, but I’m so excited it’s actually going to happen.”

Creation of the park, Phase One of RENAISSANCE Mechanicsburg, a $1.8 million project, includes continued landscaping and way-finding across the street, at S. Market and E. Main Streets, in front of PNC Bank. The project, designed by Lancaster County firm Derck & Edson, is expected to be completed in about a year. One of the highlights will be a state-of-the-art performance stage.

“This park is intended to be a magnet—it will draw people downtown and be an economic shot in the arm for businesses,” Drake said.

Symbolic elements are incorporated into the park’s design.

“We want to celebrate Mechanicsburg’s legacy,” said Pam Zaiser, DMP board member. “Mechanicsburg was a town of mechanics that fixed wagons on people’s quest to go west, so there will be outlines of wagon wheels built into the bricks on the square.”

Phase Two calls for Railroad Alley—half a block from the square—to be converted into a walkway, including benches and trees leading to Mechanicsburg’s Museum Association, which Drake calls “a treasure” of railroading and marketplace history.

A streetscape facelift, including new sidewalks, lighting, flower baskets, bike racks and a bus stop, is the focus of Phase Three. The timetable will be determined by fundraising and grant availability.

Sisters, Drake and Zaiser got involved in the DMP “purely by accident,” said Drake. The pair, walking out of Diener’s Diner six years ago, noticed weeds growing through sidewalk cracks.

“It was a beautiful spring day, we were looking at the architecture, and we said, ‘This is such a beautiful little town—we need to help take care of it,’” said Drake. She had just moved to Mechanicsburg, following a 40-year career as an English professor at Philadelphia’s Temple University. Zaiser is a retired healthcare professional.

“My sister persuaded me to move here, and it’s the best thing that’s ever happened to me,” said Drake.

Motived by those weeds, the sisters tried to attend a Historical Architectural Review Board meeting to lend a hand.

“But we walked into the wrong meeting—it was the Downtown Mechanicsburg Partnership meeting,” Drake recalled, “And we both ended up on the board purely by accident, even though neither of us had ever been involved in a downtown before.”

Zaiser said their civic involvement gives them “a mission.” Similarly, she sees the overarching goal of RENAISSANCE Mechanicsburg as a rebirth of the town’s historic mission.

“Because Mechanicsburg was developed as a town that helped people go west, it was a town built on relationships, then relationships with the railroad industry, and relationships between the townspeople and those who came to buy and sell at market,” Zaiser said. “Right now, we’re a pass-through town, but this project will change that and allow us to rebuild relationships and be welcoming once again.”