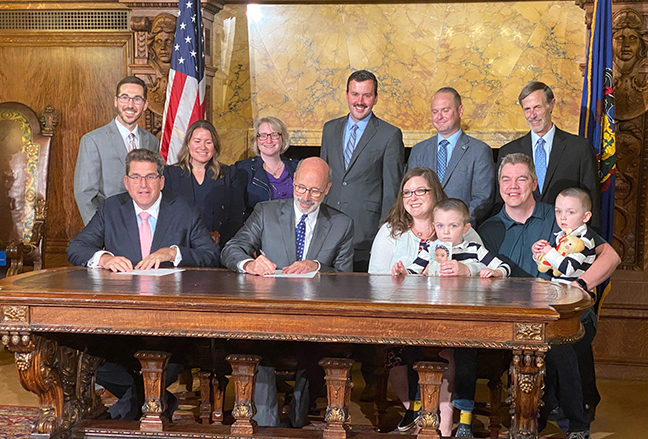 “It was definitely a redemptive moment,” said Brackbill, who also noted the significance of the timing.

Almost exactly two years ago, on Sept. 21, 2020, Senate Bill 983 went to committee. Sponsored by DiSanto, the bill proposed to widely expand the medical screening panel given to newborn babies—and to make that panel the standard of care—across all Pennsylvania hospitals. Those proceedings, held during the pandemic, were closed to the public.

Lesa and her husband Brennan watched lawmakers vote via livestream, in the fall of 2020, from their home.

“I will never forget the day we watched the final floor vote—seeing it pass unanimously. We both cried,” Brackbill said. “Because it happened during the pandemic, we never expected to have the chance to meet the governor and have the ceremonial signing.”

But about a week ago, the governor’s office called the Brackbills, asking if they’d like to attend a ceremonial event, celebrating the bill’s original signing into law as part of Act 133 in November of 2020 by Gov. Wolf.

“It meant a lot [to have this week’s ceremonial signing] because we got to show the governor Tori’s picture—it made it all worthwhile,” Brackbill said.

The Brackbills’ daughter, Victoria (“Tori”), was born in July 2014, and passed away on Easter Sunday 2016, 14 months after her diagnosis of Krabbe (pronounced “crab-ay”) disease, a severe neurological condition that can be corrected when diagnosed at birth. The Pennsylvania hospital where Tori was born did not regularly screen for Krabbe, and she wasn’t diagnosed until 5 months of age. That’s when Brackbill’s research and advocacy began.

Today, the Brackbill family includes 4-year-old identical twin boys, who attended this week’s ceremonial signing at the capitol. And Lesa Brackbill had the opportunity to tell the governor about the law’s impact. Since the state’s new screening policies went into effect, four babies with Krabbe have been diagnosed.

“It’s stunning, for a rare disease that has a 1 in 100,000 incidence rate,” Brackbill said. “You could tell the governor was happy to hear that. And he asked how close we were to a cure for Krabbe, and I had the chance to tell him that we’re close—there are currently two gene therapy clinical trials right here in Pennsylvania.”

Babies born in Pennsylvania hospitals are now screened for 63 medical conditions, making it the state with the seventh-highest number of newborn medical tests. Prior to the new law—and Brackbill’s advocacy—Pennsylvania ranked second-to-last because only 10 newborn screening tests were mandated statewide, although some hospitals such as the Penn State Health Milton S. Hershey Medical Center screened for additional conditions.

In addition to expanding newborn screening panels, the new law empowers the Pennsylvania Newborn Screening Technical Advisory Board to make any future changes needed to newborn medical tests. Brackbill, who now serves as a parent advocate member of one of that board’s subcommittees, said “experts should be deciding these things—not legislators.” However, Brackbill is thankful to all legislators who agreed to champion her cause, especially DiSanto.

“It meant a lot to us, that Senator DiSanto was willing to embrace our family and fight with us,” she said.

“Lesa’s passion and purpose quickly inspires everyone she meets, convincing me that she would ultimately succeed in turning personal tragedy into triumph,” said DiSanto. “I readily agreed to join this important cause to help avoid other young families and newborns enduring such unthinkable loss. This legislation was an opportunity to make a lasting impact of saving young lives, and it has been a privilege to honor Lesa and Tori in this special way.”

But Brackbill isn’t done fighting for Pennsylvania’s babies and families. Earlier this year, she applied her advocacy skills to help other mothers grieving the loss of their children and pursuing a similar legislative journey. It resulted in legislation that screens babies for a virus, cCMV, if they fail newborn hearing tests.

Empowering other parents through advocacy skills is now Brackbill’s personal and career goal. She serves on the boards of numerous national organizations dedicated to Krabbe and newborn screening, and she has a full slate of upcoming speaking engagements around the country. On the heels of this week’s ceremonial bill signing, Brackbill addressed the Pennsylvania Rare Disease Advisory Council Stakeholder Summit in Harrisburg. She notes the disparity between all 50 states’ newborn screening procedures, as well as the disparity among European countries.

“I think I will be involved in newborn screening the rest of my life—or until every treatable condition is addressed,” said Brackbill. “Although I wish I had my 8-year-old daughter, I know without a doubt this was meant to be my journey. My ultimate goal is to give innocent babies a chance at life that my Tori didn’t get—and if I can save other parents that pain, it’s worth it.”

TheBurg first covered Lesa Brackbill’s advocacy journey in 2018, which you can read here.