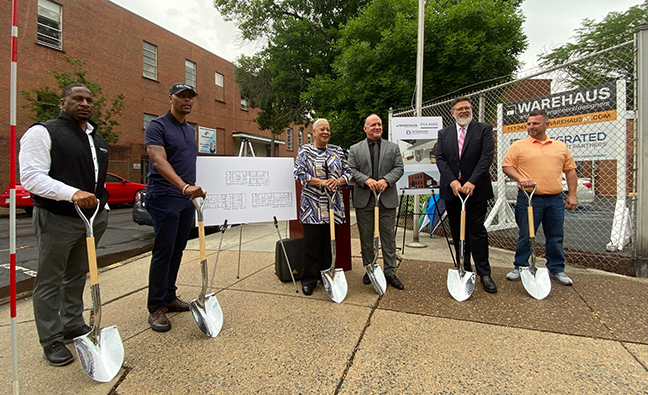 IDP’s Jonathan Bowser and Harrisburg Mayor Wanda Williams flank a rendering of the layout for The Lofts, joined by other IDP officials and Dauphin County commissioners George Hartwick and Chad Saylor.

In a place where folks once played basketball and held meetings, people soon will be eating, sleeping and simply relaxing.

The Lofts officially broke ground on Tuesday in the former Salvation Army building at Green and Cumberland streets in the heart of residential Midtown Harrisburg.

Harrisburg and Dauphin County officials were on hand to ceremonially inaugurate the project, which is being developed by Wormleysburg-based Integrated Development Partners (IDP).

“Today, we’re celebrating what’s to come here at the Lofts of Midtown and what will become a beautiful addition to an already beautiful neighborhood,” said Mayor Wanda Williams. “Each day, the future is getting brighter for the city of Harrisburg, and we’re looking forward to seeing what’s next.”

Since its founding in 2018, IDP has undertaken several area projects, most notably the mixed-use Steel Works revitalization project in Steelton.

The company first proposed the Lofts in December 2020 as a for-sale condominium project, but since has changed the business model to rental units, according to Managing Partner Jonathan Bowser.

IDP officially bought the 18,500-square-foot, mid-century building last year from the Salvation Army, which relocated in late 2019 to a much larger facility on S. 29th Street.

The Lofts project includes 16 one- and two-bedroom units, plus 32 parking spaces located in a surface lot across the street. 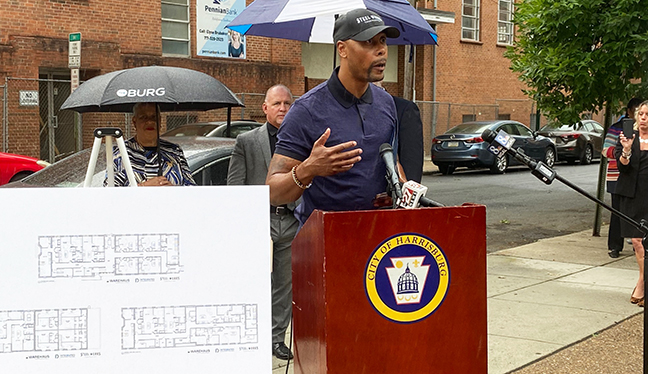 IDP’s Jonathan Bowser spoke at the ceremonial groundbreaking on Tuesday.

Bowser said that his company called the project “The Lofts” because several units are being built in the former, multi-story Salvation Army gymnasium.

“Those will be two-story lofts, so we’re very, very excited about that,” he said.

He added that interior demolition recently began in the building, with construction expected to follow in several months. He anticipates occupancy in spring 2023.

On Tuesday, Dauphin County commissioners George Hartwick and Chad Saylor were on hand to issue a proclamation declaring June 14, 2022, the “Lofts of Midtown Day” in the county.