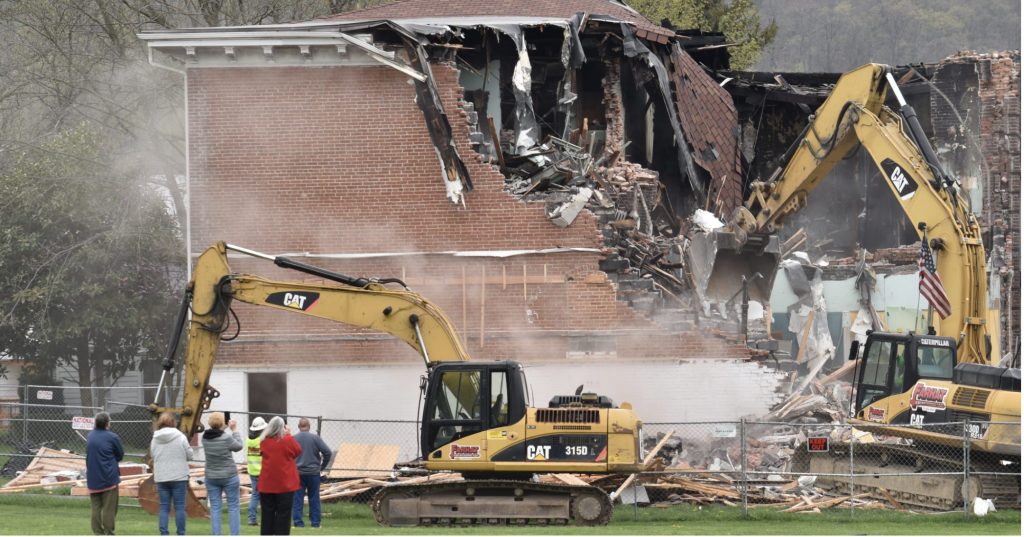 Doctor bags and portraits of Dr. and Mrs. Heck themselves, gone. Original paintings from local artists, gone. Military uniforms, gone. A schoolroom, with old wooden desks, staged to welcome children ready to dip their pens into the inkwells, gone.

All went up in flames in the early morning of Sunday, Oct. 17, 2021. The home of the Dauphin-Middle Paxton Historical Society, with a meeting place, library and museum, was a total loss.

“We had a whole curio cabinet of cornhusk dolls made by two sisters,” said library Manager Kathy Fisher. “You can’t replace something like that. Financially, they weren’t worth much, but they represented someone from our community, and making them is kind of a lost art.”

What survived the fire were a few archived or scanned documents and photos, plus the rugged determination of a society that perseveres. An organization devoted to preserving the past is working toward a future that includes a new home. To help raise funds toward that day, the society is holding a Heritage Day Gala, Sept. 17 at the Peter Allen House, an event venue and Middle Paxton’s oldest house.

Pre-fire, the society’s home was a former, 19th-century Central Dauphin School District schoolhouse rented from its owner, Dauphin Borough. Post-fire, members hold monthly programs at Zion Lutheran Church in Dauphin, while the board meets at the borough building.

The fire, possibly sparked by an electrical problem, didn’t take everything. Society stalwarts praise the firefighters who entered the building’s gutted-but-standing portion, when the heat subsided to salvage what they could.

“They brought out our family-tree binders, all of our original photograph collections,” Fisher said.

Those photos and some irreplaceable items, such as diplomas from the schoolhouse graduates, are undergoing professional restoration, a costly but high-priority process.

Society members held their collective breath before demolition of the ruins, as a backhoe operator gingerly plucked waterlogged file cabinets from the second floor before they could plunge to the first.

Ironically, the society had hosted its annual Heritage Day and celebrated the borough’s 250th anniversary the day before the fire. Items staged for display and left out overnight were consumed, but one society member just plumb forgot to bring out a precious set of Civil War discharge papers donated by the soldier’s great-great-granddaughter.

The documents stayed snug in a fireproof cabinet, undamaged by the water and smoke that seeped into other materials.

“We were so thrilled,” Fisher said. “You don’t duplicate those things.”

Some of the smoky items salvaged are stored in donated maritime shipping containers. Other damp, charred materials are now in Fisher’s basement. A Toshiba office copier donated by state Rep. Sue Helm occupies Fisher’s foyer, and society members show up for copying sessions to make the smelly, fragile documentation useable again for research and consultation.

“It’s been a tremendous amount of work, but it’s worth it to preserve our history,” Fisher said.

“Dauphin and Middle Paxton were in all the wars,” said museum Manager Jeannette Bender. “They were very dedicated to being in the military, all the way back to the Civil War, and of course, the Revolutionary War.”

The society continues to attract new members. Dynamic programming helps. So does Fisher’s engaging newsletter, sharing quirky news items from the area’s past, like the 1931 tidbit, “Cow Chokes on Apple.” And from summer 1936, “Girls are to be forbidden from wearing any attire that goes to the extreme of shorts and backless dresses in the upriver borough (Dauphin) where the Chief Burgess, C.H. Welker, has warned he will prosecute anyone on the streets in what he calls disrespectful costumes.”

A rebuilding committee is exploring options and funding—and possibly, if Fisher has her way, divine intervention.

“I would love to see the Lord just give us a piece of property somewhere, an old house where we could add on a big meeting room,” she said. “We would love to have something historic to make into our museum.”

Fundraisers have included a successful flea market and sales of the annual calendar. Residents and organizations opened their wallets. A childcare center’s penny war raised $1,200.

“A lot of people can’t give a lot, but what they give is so much appreciated,” Bender said.

The Sept. 17 gala, emceed by radio host, RJ Harris, will include high-end raffle items. Peter Allen House owner Frank Pinto donated use of the nearly 300-year-old venue because, “if you forget your past, you’ll never understand your present.”

The society is blessed with “leadership and the sense of community,” Pinto added. “Everywhere you look, it abounds with pride. You had a series of great leaders, and everyone’s a volunteer. It might be part of their nature.”

Incorporated in 1787, Middle Paxton is a rural township just minutes north of Harrisburg, the kind of place where mountains seem to rise from the banks of the Susquehanna River.

It’s also the kind of place where residents cook up such ideas as planting a Statue of Liberty replica mid-river on an abandoned bridge pier. Families stay for generations. Children leave for college and career but then return. Over the centuries, residents have worked the fields, canals, railroads and riverfront industries.

Society members mourned the loss of the artifacts presenting a picture of that tightknit community.

“I know losing a family member is terrible, but this was close to it for me,” Fisher said. “It’s my life. Other than my family, it’s what I do. It’s so heartbreaking. It still is. If I think about it too long, I can start crying all over again.”

Salvaging some items provided relief, she said, and demolition of the old schoolhouse meant it was time to move on.

Maybe it’s the sense of community that fuels the urge to keep going, Bender added.