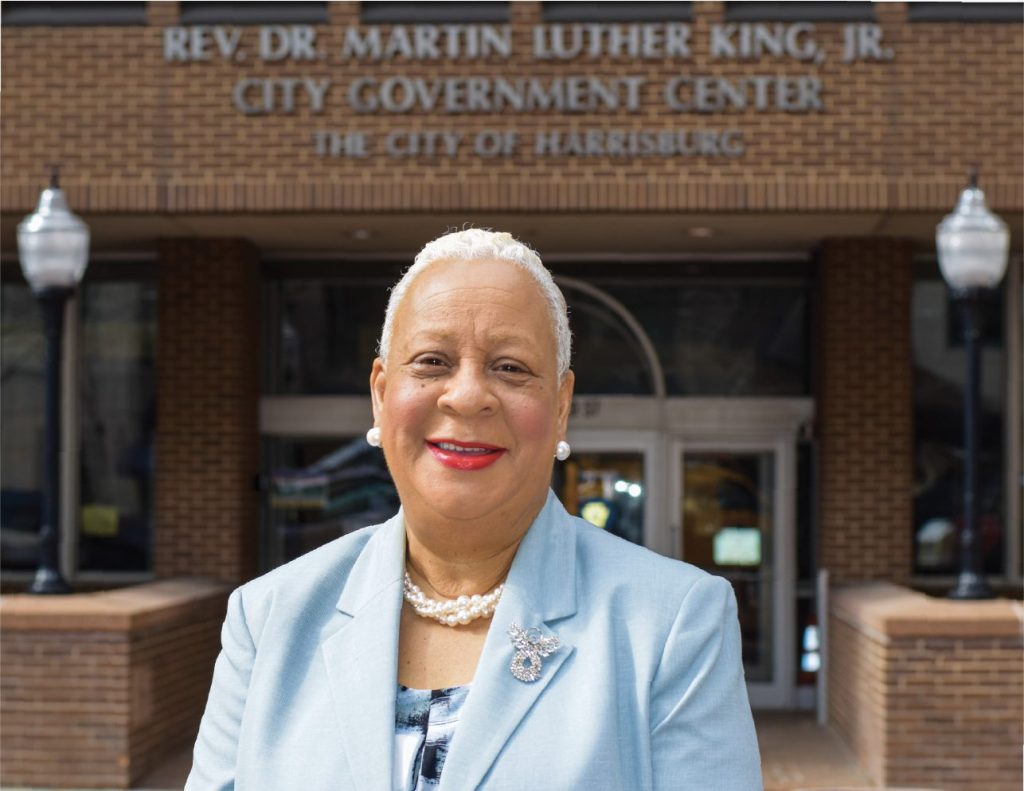 Wanda Williams. Photo courtesy of the City of Harrisburg.

“I think everyone knows about Wanda already,” Harrisburg’s new mayor said when I told her I wanted to write a story not so much on her position, but on her, as a person.

“Just going to the grocery store, I only had to get six things, but it took me two hours to get out of there because I was stopped about 10 times,” Wanda Williams said.

Even people from surrounding cities have approached her. She’s traveled to Philadelphia and Maryland and has been recognized, she said.

“That makes you feel good.”

It’s true, as a lifelong resident of the city and long-time public figure, Williams is widely known. She’s known in this town, not only for her time on Harrisburg’s school board or as City Council president, but as a neighbor, relative, friend, cheerleading coach and after-school tutor for neighborhood children.

Williams is right—a lot of people do already know who Wanda is and have way more stories about her than I could ever fit into this piece. And as Harrisburg’s 39th mayor for the past four months, Williams has taken on even more recognition and responsibility in the community she calls home.

This recognition, this position, it’s a place that, as a young girl, she never envisioned herself having. In fact, it stands in contrast to her personality for much of her younger years.

“I was a quiet individual,” Williams said. “I kept to myself.”

She mostly spent time with her sisters and family, she noted. Coincidentally, her closest childhood friend was also named Wanda. “Wanda 1” and “Wanda 2,” as they were called, remained friends for years.

Her high school years started the introverted young Williams on a new course, as she joined the debate team with the encouragement of her high school teacher.

Before his passing, Williams’ father would tell her, “You’re always my little debater.”

She went on to attend HACC, where she studied criminal law and met her husband Jerome. Since then, she worked in the office of the attorney general, for the local AFSCME branch as a union president and for the Teamsters Union.

“I’ve always wanted to be an advocate for those who couldn’t speak for themselves,” Williams said.

In 1998, Williams joined the Harrisburg school board as a concerned parent of children in the district. But, after becoming unhappy with how former Mayor Steve Reed was handling the school district as the receiver at the time, she decided to run for City Council. From 2006 to 2021, she served on council, sitting as president for her last two terms.

“I was quiet all of my life, but then my husband told me, ‘You’ve gotten to be such a fighter,’” Williams said. “I said, ‘I have to, there’s a reason and a cause now. I’m going to be the voice for the people.’”

After her 15 years on council, Williams, 68, was ready to retire. She and her husband had all of their vacation plans laid out. But then, Williams grew distrusting and unsatisfied with incumbent Mayor Eric Papenfuse as he prepared to run for a third term. So, as she had done with school board and city council before, she decided to do something about her concerns. In March 2021, she announced a run for mayor. She won the race and was inaugurated in January.

But the process getting there wasn’t an easy one emotionally for Williams, who faced harsh criticism and personal jabs from Papenfuse, who, after losing the primary, launched a write-in bid for the general election.

“My father got a little upset when he heard of all the negative criticism and he said, ‘If I was younger, you know I would do something about that,’” Williams said with a chuckle. “He encouraged me to keep my head up.”

At the same time, both of her parents’ health was declining. Before Williams’ mother was diagnosed with dementia, she knew her daughter was running for mayor, and she was so proud, Williams said.

Within a few weeks of each other, during Williams’ campaign season, both parents passed away.

“My dad, one last thing he said was, ‘You’re going to win, I love you,’” she said, tears running down her face.

Facing the criticism during that time, Williams said that she reached a peak of anger, wanting to clap back at the negative messages being shared about her. But, she remembered her parents.

“I wanted to come out negatively, but I remembered, it’s not good, just keep your faith,” she said. “But I won. I was victorious. I’m here for four years, and they can’t do anything about it.”

During her campaign, Williams leaned heavily on her position as a lifelong city resident, counting on recognition to win votes. She repeatedly assured constituents that she would be an approachable, relational mayor.

For her first few months in office, she believes that she has followed through on that. She pointed out her open door initiative on Fridays, where residents can meet with her to voice concerns. Williams also has taken to visiting the scenes of residential fires and other emergency situations.

She shared a story about visiting the home of a young woman whose roof was severely damaged during a windstorm. Walking through the house on a Saturday, Williams discovered a dysfunctional furnace, busted pipes, doors without locks, and a disabled family member suffering in the cold. Since then, the city has made repairs to the home, and, through federal housing funds, is installing a new furnace and working pipes.

“These are the kind of things that make me feel like I needed to be in this position,” Williams said. “The most important thing I have with people in this city is that they trust me. They know that, if they ask for assistance, I’m going to try hard.”

A Legacy for Harrisburg

Williams recalled, in high school, the first time a Black student was chosen as homecoming queen. It served as a beacon of hope for her that things were changing in the wake of the Civil Rights era. Yet, as a girl, she was still a long way from seeing a woman or person of color as mayor of her city. It was even more unimaginable that she would be in that seat one day, she said.

“It is such a legacy for the young people that I’ve engaged with,” she said. “One girl said, ‘Well if you’re the mayor, then I can be the president.’”

Caring for the city’s youth has been one of Williams’ priorities. After all, she is a mother of five, a grandmother of 18 and a great-grandmother of 16, with another on the way.

Beyond that, she’s passionate about creating more affordable housing, paving streets, providing consistent city services, cleaning up trash, demolishing blighted buildings and promoting homeownership. Gun violence is another priority, as it has spiked recently in the city. Williams’ administration is taking steps to address that, she said, through a possible contract with an organization that would study group violence in Harrisburg and work to prevent it, among other goals.

She also soon plans to propose uses for the city’s $48 million portion of federal American Rescue Plan funds, a historic inflow of cash for the city.

But overall, Williams summed up her vision for the city, her home, as “a revitalized Harrisburg.”

“I want to see people walking around and just enjoying the city,” she said.

Williams’ work has really only just begun. She inevitably will face long hours over the next four years with many obstacles and frustrations, as well as victories.

So, when she gets home for the night, and her husband has dinner ready, which he’s been doing since he’s retired, it’s “just wonderful.”

“I kick off my shoes, sit down and watch NCIS.”