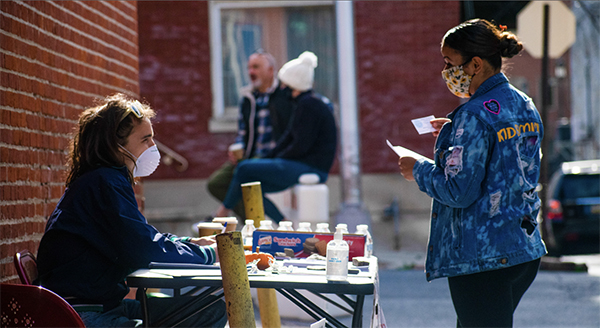 When the pandemic hit, all Bobby Mitchell wanted to do was stay home.

He would be considered at-risk for many reasons. He’s 61 years old and has various health issues, including diabetes and high blood pressure, not to mention the kidney transplant he underwent.

Mitchell was receiving Social Security disability benefits, but it wasn’t enough to cover rent, utilities and other expenses.

Before the pandemic, Mitchell collected aluminum, copper and other materials from nearby scrapyards to make up the difference. With help from his friend, he made around $500 in a “good month.”

As March ushered in COVID-19, he couldn’t collect anymore. His son was out of work, and his son’s mother wasn’t working due to mental health issues. Mitchell fell behind on rent.

“You’ve got to think about your family,” he said. “I had to take care of his needs, her needs and mine.”

All Mitchell wanted to do was stay home, but that grew increasingly uncertain as back rent piled up and an eviction notice loomed.

However, after working with Kay Pickering at The Center for Peace and Justice in Harrisburg, armed with a federal document, Mitchell was able to postpone his eviction.

When the pandemic hit in March, the Pennsylvania Supreme Court halted evictions, which Gov. Tom Wolf extended through the end of August. In September, the U.S. Centers for Disease Control picked up where the state left off, declaring a ban on evictions through Dec. 31. This applied to evictions for non-payment of rent, as in Mitchell’s case.

Although the moratorium protected these residents from a lockout, landlords could still file for eviction.

In Harrisburg, between Sept. 1 and Dec. 7, there were 528 evictions filed, according to data from the CREATE Lab at Carnegie Mellon University and Philadelphia Legal Assistance. Of those, 151 tenants were protected under the CDC’s declaration and could stay in their homes, at least through the end of December. There were 171 cases with scheduled hearings, and in 206 cases, landlords were granted possession.

Caleb Cossick, a volunteer with Greater Harrisburg Area Tenants United, which advocates for renter’s rights, explained the reason behind lockouts happening despite the moratorium.

There were some people who weren’t aware of the moratorium or the declaration that they were required to fill out in order for it to apply, Cossick said. There were others who were evicted due to a month-to-month lease, in which the landlord can cancel whenever they want. Some were evicted because they only had an “oral lease,” which is less likely to hold up in court. Cossick calls these “loopholes.” With the declaration being relatively vague, he said that a magisterial district judge was often left to interpret the rules how they saw fit for each case.

“If a landlord wants to get around it [the declaration], they can try,” he said.

Throughout the pandemic, Greater Harrisburg Tenants United has set up tables outside court offices and at community events with the hope of stopping evictions by educating tenants of their rights.

In the declaration, the tenant had to certify that they had “used best efforts” to obtain all available government assistance, that they were unable to pay their full rent, but were paying as much as they could. They must also be facing homelessness if they are evicted, the declaration form said.

According to Harrisburg attorney Jordan Cunningham, this is one of the biggest issues. Renters are not paying anything even if they are able to.

“Zero isn’t what you can afford if you are still working,” Cunningham said. “My concern from the aspect of the landlord is, if we are going to have a moratorium in place, the landlord needs to have some way to enforce the lease and receive some rent, if not all of the rent.”

After all, landlords have obligations, as well. They have mortgages and taxes to pay. They also have a responsibility to keep up with the maintenance of the building, Cunningham said.

Angela Parker-Quarles’ phone has been ringing nonstop lately. She estimated that her phone calls have increased by 45% over the past months.

People call Parker-Quarles at The Fair Housing Council of the Capital Region frantic and desperate for help. When contacted recently, she was working with a 70-year-old resident in Steelton who was facing eviction.

The Fair Housing Council tries to bridge the gap between landlords and tenants, Parker-Quarles explained. They provide education on renters’ rights and responsibilities.

During the pandemic, she has tried to help clients think long-term. She’s afraid some people aren’t preparing for what happens after the moratoriums end.

“You can flash that declaration, but if you’re doing that without a plan, they’re just going to be at your door when it ends,” she said.

She’s been helping people find employment and other support services in order to get back on track with rent. However, rental assistance is in short supply, she said.

For people like Bobby Mitchell, that would make all the difference.

With no one in Mitchell’s household employed, they couldn’t pay their full rent. Eventually, his son and son’s mother found employment. While the family is able to keep up now, they have three months’ worth of back rent.

Christian Churches United of the Tri-County Area is able to help families facing homelessness find shelter, Executive Director Darrel Reinford said. They also have some funds for rental assistance through their homelessness programs.

In December, the city of Harrisburg also launched a rent relief program to provide funds for those struggling to pay rent. They offered up to $5,000 per household.

According to Sandy Ballard, public services coordinator for the Dauphin County Bar Association, one of the biggest issues is a lack of communication between landlords and tenants.

“What’s surprising is people get an eviction notice and won’t even call the other side and say, ‘Hey, can we talk?’” said Ballard. “It’s in both parties’ best interests to come up with a plan.”

Ballard worked with Matt Rich of MidPenn Legal Services, Reinford and others to come up with a plan to try to help stop evictions. They are hosting free mediation sessions for landlords and tenants.

Every Tuesday at 9 p.m. on Zoom, volunteer attorneys work with landlord-tenant pairs from Dauphin County to provide education and assist them in agreeing on a payment plan to avoid eviction. While there had only been a few sessions by early December, Ballard said that they are going well.

Mitchell has boxes packed around his house. He fills a few, here and there, “just in case,” he said. When I called to check in on him on a mid-December morning, he said he was “hanging in there.” But as a wet snow fell in Harrisburg, Mitchell said that he was worried. He still had around $4,000 of back rent to pay. “It’s cold out there,” he said.

That same night, Harrisburg City Council voted to impose a 30-day moratorium on evictions for non-payment of rent and lease expiration. Through mid-January, Mitchell was safe again, possibly longer, if the city or federal government chose to renew the ban on evictions.

“Prolonging this will probably help us,” he said. But in this case, time isn’t money, and Mitchell expected the debt would still be there once the moratorium ends, like the last one.

While moratoriums like the CDC’s and Harrisburg’s deal with the immediate need of shelter during a crisis, Cunningham said that extending them too long is “really just kicking the can down the road.”

Parker-Quarles expressed a similar sentiment, adding that a moratorium should go hand-in-hand with some sort of payment plan requirement for the tenant.

“I’d like to see some kind of plan in place to get these individuals out of the situation,” she said.

For now, Mitchell’s family will keep saving a bit of money from each paycheck and keep some boxes packed, just in case they need to find a new place to live.

“All we want to do is have a roof over our heads,” he said.