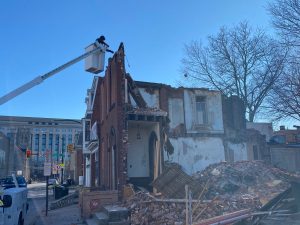 Demolition of the historic Jackson Hotel on Thursday.

Dave Kegris, owner of the Jackson House restaurant, was busy flipping burgers and serving customers on Thursday when he heard a crashing sound and knew—this couldn’t be good.

When he looked out the window, at about 1 p.m., it was raining bricks. The historic Jackson Hotel building was crumbling.

“If someone was standing out there, they would’ve been killed,” Kegris said.

According to Matt Long of Harrisburg Commercial Interiors, the owner of the building, his crew was working to put braces on the walls of the building when the situation became unsafe. The workers were able to get to safety before the wall facing Herr Street, which featured a mural highlighting local Black history, collapsed on itself.

Staff and customers at the Jackson House on the 1000-block of N. 6th Street saw falling bricks hit cars and damage the restaurant’s roof and sign, Kegris said. A clean-up crew was on the scene shortly after.

Within a few hours, Long began to demolish the rest of the building for safety. He expected that, by night, most of it would be done.

The circa-1884 Jackson Hotel building once catered to African-American patrons who were denied service in Harrisburg’s white-only hotels. When long-time owner German Jackson died in 1998, the building was boarded up and has remained empty since.

Over the years, the building had a long history of changing hands without much improvement being done. The building was first left to Kegris in Jackson’s will and remained with him for 20 years before he sold it in 2015.

Long purchased the Jackson Hotel in 2018 with plans to stabilize the foundation and construct a completely new interior and roof. He intended to create apartments and commercial space. He had also hoped to save the exterior wall that held the mural of prominent African American figures who one stayed at the hotel. 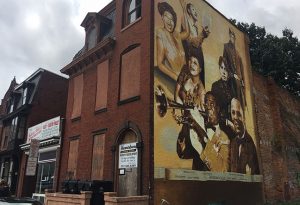 The mural that once covered the Jackson Hotel wall.

That mural is now destroyed.

“There was always that risk,” Long said of the collapse. “The building was just a shell.”

Sprocket Mural Works created the mural during the 2017 Harrisburg Mural Festival to honor the history of the building and “the amazing Black entertainers” who stayed at the Jackson Hotel, according to co-founder Megan Caruso.

“We did it to celebrate the neighborhood and the history there,” she said.

Caruso said that she was saddened by the news, but not surprised, as she knew that the building was in very bad condition.

“We appreciate that the owner tried to disassemble the building and keep the wall up, but we knew this could happen,” she said.

The wall collapse adds urgency to Sprocket’s plan for the 2021 Harrisburg Mural Festival to paint another mural, in another location, honoring Black lives, Caruso said.

Long now plans to start fresh, saying he had always expected this to be a rebuilding project. He is still holding to the plan of creating four apartments and downstairs commercial space.

Ted Hanson who has lived on Boas Street for 23 years, near the Jackson Hotel, worries what it will become. He was friends with Jackson before he passed and remembers the building in “pristine” condition.

“I’m disappointed and angry, but completely unsurprised,” Hanson said. “I absolutely predicted this was going to happen.”

Long said he plans to rebuild the building as close to its original state as possible. Whereas he previously wanted to restore parts of the building, there now is little left but piles of bricks and the story of the once-bustling Jackson Hotel, before it was empty, before it fell.