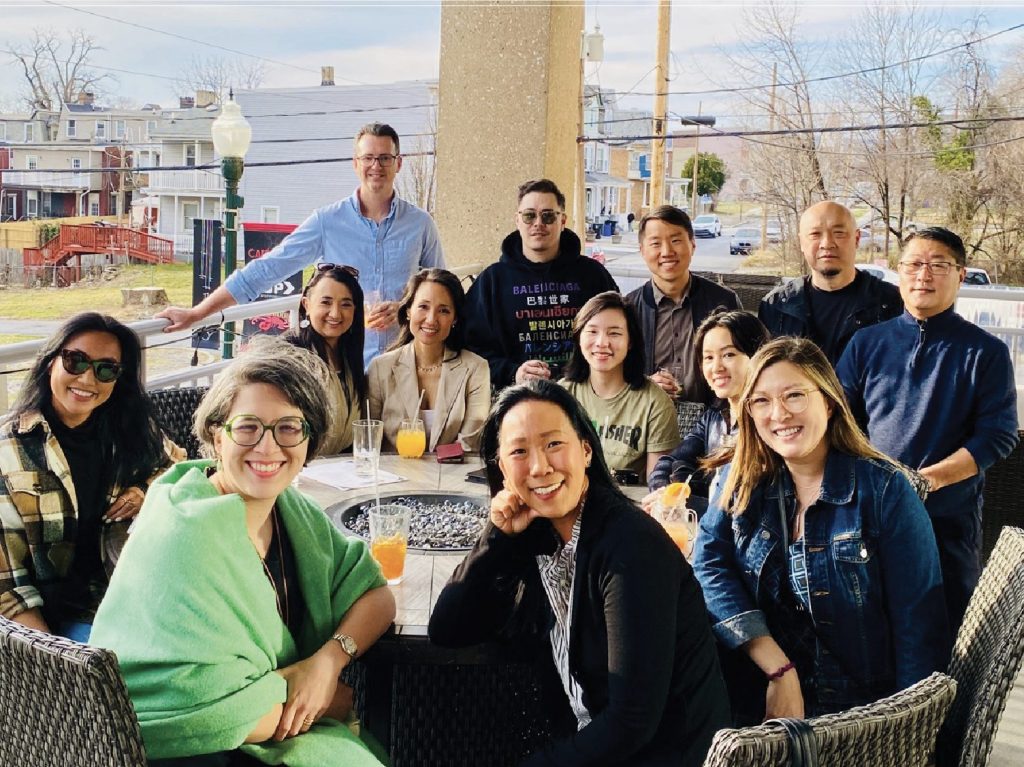 As Min sat in the Green Street Little Amps, the March day seemed like any other. People greeted one another as they took their seats in the cozy neighborhood coffee shop. But for the Asian American and Pacific Islander (AAPI) community, it was anything but just another day.

It marked the one-year anniversary of the targeted killings of eight people, including six Asian women, in Atlanta.

Min unfortunately had become accustomed to hatred and violence being directed toward her, her mom and dad, grandparents, aunties and uncles. Growing up, she experienced eggs, bricks and tomatoes thrown at their house. There was name-calling and a fight at 10 years old because of her Korean appearance. And in the ‘90s, someone defaced her childhood home with a painting of a swastika and tagged it “gooks.”

“I’ve been told to go home more times than I can count,” said Min.

During the pandemic, walking with her daughter on Front Street, a group of men yelled that they were the coronavirus and should go home. Her 3-year-old waved back in greeting, misunderstanding and thinking they were saying, “Hi.”

“My husband and I were at the Farm Show Complex and we were drinking our milkshakes and were in a crowd of people, and somebody stuck their head between us and said go the f*** home, you chink,” she said.

The person disappeared in the crowd before Min’s husband could react.

Even with all of that and more, it was the Atlanta shooting that galvanized Min, who admittedly had bought into the myth of the model minority and, up until that point, had continually told herself, “it’s not that bad.”

“It was like the final culmination, like hatred runs so deep that somebody actually would kill us because of it,” Min said. “That stereotype could kill us.”

“I need help,” Min told her. “I need to grieve with someone.”

So, they gathered outside around a fire pit, sobbing about the lives lost, about how they saw their aunties and mothers in the faces of those who died.

That’s also when they realized that they needed a group where they could do this very thing—gather, connect and share. So, the Harrisburg Asian American Pacific Islander (HAAPI) group was formed.

Crawdaddy’s Restaurant and Bayou Bar graciously offered HAAPI a place to meet, even though the restaurant wasn’t actually open. And people came.

One of those people was Joe Lee. At HAAPI’s one-year anniversary celebration with music, drinks and lots of conversation, he said that the group offers “unspoken, implicit understanding of a shared experience.”

Two group members with that shared experience are Virginia Lucy and Amy Zecha, both biracial and navigating two worlds, often feeling like neither racial group welcomes them fully. Because of this, Lucy was anxious about trying out the group.

“It was so much better than I thought it would be—a bright light among so many dark moments,” she said.

That evening was the first HAAPI event for Sarah Herr. Joining her Caucasian family through adoption, Herr described feeling a sense of loss. She said that she’s never had an Asian friend or been around those of Asian heritage.

The vivacious young woman also described being harassed for her Asian heritage. Once at the doctor’s office, someone told her “go back to your country for bringing corona over,” she said. She described that and incidents of people trying to “jump her” on State Street in Harrisburg and in Washington, D.C.

The harassment, along with the shootings and assaults of other Asians, made her anxious and at times afraid to go out.

“It’s times like that, that I wished I had an Asian community of friends that could understand,” Herr said.

That defines HAAPI, a community whose motto is, “Stories not Status.” From the beginning, the rule was not asking people what they did for a living. That provided automatic leveling, making the statement that this isn’t a networking group—it’s a group committed to being there for one another and celebrating their heritage.

HAAPI will celebrate Asian Pacific American Heritage Month with the entire Harrisburg community this month during 3rd in the Burg, over the weekend of May 20 and 21. The event will kick off at the Broad Street Market, with happenings at the Midtown Scholar and Midtown Cinema, emphasizing AAPI contributions, stories and culture. Min hopes that this event can help break down walls and bring understanding of people as individuals rather than as a dehumanizing monolith.

“I love the idea of the celebratory, because you bring together people with food and festivities, but the deeper reason is because…when you understand and get to know culture so deeply, your stereotypes, your prejudice, the discrimination melt away because there’s a humanization and dignifying of the communities,” Min said.

At Crawdaddy’s, the group settled in with drinks and comfortable banter. The feeling of relaxed familiarity permeated the scene.

“This is definitely a community in central PA that we didn’t have,” Lee said.

The Harrisburg Asian Pacific American Heritage Month celebration takes place May 20 and 21. To learn more about HAAPI and the event, visit Instagram @AAPIHBG or contact HAAPI at HAAPI2021@gmail.com.